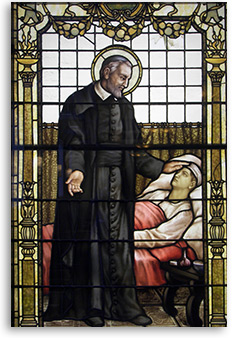 Vincent de Paul came from a sturdy peasant family whose farm was situated in the Basque region of southern France. Early on his family recognized his aptitude for learning, and sacrificed to give him an education. He himself had dreams of achieving great success and being a financial support to his parents. Priesthood was the way he chose to achieve his goals. Early experiences as a priest included a short stay in a parish outside Paris, where the people showed him how to be a caring pastor. He spent some time as the chaplain of the wealthy and important De Gondi family, and tutored their sons. He was called to the deathbed of a peasant who confessed a mortal sin that he had carried for many years. Shortly after this, Vincent preached a sermon on the need to make a sincere general confession, a turning point in his own spiritual life. When Vincent de Paul had this conversion experience (at the age of 37) he gave his life, his talents, and his enormous compassion to the service of the poor. In time, many and varied ministries emerged which would bear the stamp of his innovative practicality, and he constantly sought new and better ways to see them to completion, in parishes, on the streets of the city, in rural areas, among prisoners and the indigent elderly, in the houses of the sick poor.

Vincent had an instinctive understanding of the need for collaboration and networking among the various classes of the society of his day, and formed organizations that crossed all strata of society, including the Ladies of Charity (who came from among the upper classes), his own community of priests and brothers in the Congregation of the Mission, and the Daughters of Charity, many of them poor and illiterate women from the rural areas. But he also found ways of engaging those to whom he offered his works of charity, encouraging them not only to reach out to one another in solidarity but also to become self-sufficient themselves.

His instinctive sense of mutuality allowed Vincent to take seriously the tasks of initiating and encouraging innovative projects, figuring out how to structure them, and taking prudent risks to see them to completion. The establishment of the Ladies of Charity, the Tuesday Conferences for the spiritual renewal of the clergy, and the founding, with Louise de Marillac, of the Daughters of Charity were some ideas prompted by his co-laborers that he was able to translate into realities. Because he was himself convinced of the worth of every person, others in the Company of Charity embraced the import of respecting the dignity of all who came to them for assistance.

His faith in God’s providence was the touchstone of his spirituality, and saw him through the desperate times of famine, war, political intrigue and religious unrest that plagued 17th century France.

Vincent lived his life with a great sense of urgency about serving the poor. He never wavered in his steadfast love and concern for them. The France he left when he died in 1660 was a far different place from the one he was born into, and people of all classes in society recognized the role he played in making it so. Today his spirit lives on in the more than one million persons around the world who claim St. Vincent as their patron.

The stained glass window above was originally located in the lobby of St. Vincent’s Hospital, NYC.