The story of the Sisters of Charity in North America began over 200 years ago in Emmitsburg, Md., with a small band of women under the leadership of Elizabeth Ann Bayley Seton. Our story in New York goes back almost that far. It is a story of thousands of lives serving God’s poor, a story of tough love and high standards, a story of caring and compassion. It is a story of needs met, difficulties faced, challenges overcome, societies changed—mostly, with little or no resources. It is a story of the marvelous mission of Charity—and with you, our partners in ministry, the story continues.

1809  Elizabeth Seton begins the Sisters of Charity—the first religious community of women founded in the United States—in Emmitsburg, MD. She adapts their Rule from that of the Daughters of Charity in France, founded by Saints Vincent de Paul and Louise de Marillac.

1810  Elizabeth Seton opens St. Joseph Academy and a free school in Emmitsburg. The free school plants the seeds of Catholic education in the U.S.

1814  Mother Seton sends Sisters on the community’s first mission outside Emmitsburg: to manage an orphanage in Philadelphia, PA.

1822  Sisters take charge of girls’ department of St. Patrick’s School, Mott St., the first of hundreds of parochial schools in New York staffed by the Sisters.

1846  Thirty-three Sisters, about half of those on mission in New York, establish an independent community under the jurisdiction of the Archbishop of New York. They elect Sr. Elizabeth Boyle as their leader. The rest of the Sisters choose to return to their Emmitsburg roots. The Sisters remaining in New York have the care of three orphanages, three academies and three parish schools. 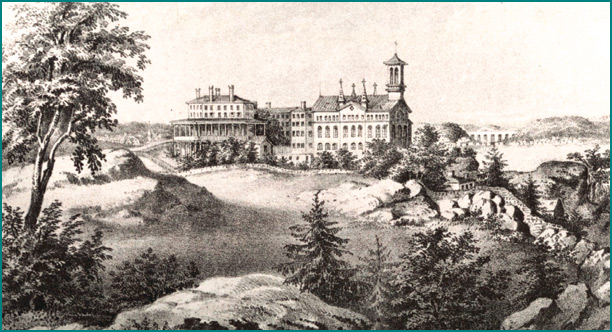 1849  The new community opens its first two missions, as huge numbers of Irish immigrants come to North America in the wake of the potato famine. Four Sisters are sent to Halifax, Nova Scotia to care for orphans and immigrants; [in 1856, an independent community is formed there]. Four Sisters with lay medical colleagues begin St. Vincent’s Hospital in Manhattan, to care for victims of the cholera epidemic.

1869  Sister Mary Irene Fitzgibbon opens the New York Foundling in a rented house on East Twelfth Street. The post-Civil War increase in cases of infanticide and infant abandonment prompts some prominent laymen to ask the Archbishop of New York for the help of the Sisters of Charity in response to this need.

1888  St. Joseph’s Hospital, Yonkers, is incorporated under the direction of Sisters of Charity.

1889  The Sisters open a mission in Nassau, Bahamas with a free school.

1892  St. Vincent’s Hospital opens a nursing school. Over 5,700 students would graduate before the school closed in 1999.

1910  New York State grants a charter for the College of Mount Saint Vincent, which evolves from the Academy’s fifth-year program begun by the Sisters.

1958  Convent of Mary the Queen in Yonkers opens as a residence for senior Sisters.

1962  Pope John XXIII convenes the Second Vatican Council. The Sisters of Charity begin an intensive renewal of their spirituality, mission, and every other facet of their lives.

1965  Led by Mother Loretto Bernard and her Council, Sisters participate in the Harlem March for Civil Rights.

1970s  Responding to the Church’s call, several Sisters of Charity volunteer to serve in Peru and Chile at a time of great social and political turmoil.

1971  Three Sisters of Charity begin the Congregation’s first Central American mission in Guatemala to serve the indigenous Mayan people. Sisters begin to serve Native Americans in Arizona and in Appalachian missions in North Carolina, and (1972) Kentucky.

1975  Elizabeth Seton is canonized, the first native-born American saint. Sisters begin the Associate Relationship program for those who wish to share the mission and spirit of Charity from within their own life styles.

1995  In the Vision 2000 Direction Statement, Sisters commit to respond to three signs of the times: needs of women, the earth, and persons living in poverty.

1999  Under the leadership of Sr. Mary Ann Garisto, SC, Sisters Hill Farm is established in Stanfordville, NY, offering healthy, organically grown food to its shareholders and to organizations serving persons living in poverty.

2005  Elizabeth Seton Pediatric Center, begun as an affiliate of the New York Foundling to provide services to medically fragile children, becomes an independent healthcare organization, including the John A. Coleman School and the Children’s Rehabilitation Center.

—  White Plains campus of the John A. Coleman School opens.

2008  Sisters open a Formation house in Guatemala for women interested in joining the Sisters of Charity.

—  The Mott Haven Academy Charter School, with special services for children in the foster care system, opens in the South Bronx in partnership with the New York Foundling.

2009  The Barbara Ford Center for Peacebuilding opens in Guatemala, offering programs of physical, spiritual, and emotional healing,leadership and empowerment for lay and religious leaders.

2011  Seton Service and Leadership Program at College of Mount Saint Vincent is launched to prepare students as service leaders in the spirit of the Sisters of Charity.

SCNY hosts sixty leaders of the Sisters of Charity Federation of North America for their annual meeting.

The worldwide Vincentian Family celebrates the 400th anniversary of the Vincentian charism.

2018  SC leadership calls for prayer and action in response to situations of concern: mass shootings such as one in a Parkland, FL high school; natural disasters in Guatemala; and increasing detention of undocumented migrants, including children forcibly separated from families.

2019  Chapel of the Immaculate Conception at Mount Saint Vincent is renovated.

2020  Eleven ministries sponsored by the Sisters of Charity provide education, health care, social services, and housing for more than one million people in New York and Guatemala: children, families, immigrants, those who are homeless and hungry, young people and seniors, those who are vulnerable and in need of advocates.

SCs and their ministries, large and small, in New York & Guatemala respond to the Covid-19 pandemic with creativity and courage, despite its devastating impact.

Deaths of Black men & women spark nationwide protests, growing awareness of the sins of racism and white supremacy and calls for systemic change.

Members of the Sisters of Charity and the College of Mount Saint Vincent communities affirm their commitment to the seven-year Laudato Si’ Action Platform (LSAP).