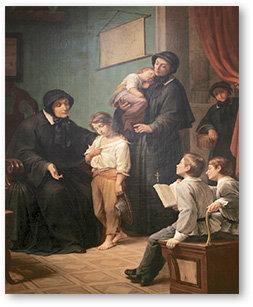 The Sisters of Charity of New York trace their roots to 1633, when St. Vincent de Paul and St. Louise de Marillac founded the Daughters of Charity to minister to the poor in the cities and villages of France.

In 1809, their rule was adopted by Elizabeth Ann Seton, a widowed convert to Catholicism, for the Sisters of Charity, the order she began in Emmitsburg, Maryland. It was the first community for religious women established in the United States, and their first mission was St. Joseph’s Academy and Free School for girls – one of the earliest Catholic schools in the nation.

The early focus on caring for orphans and educating children expanded into practically every area of charity and social justice: health care; service to families, the homeless, immigrants, and senior citizens; education at all levels; pastoral ministry; advocacy for civil rights, peace, food and water security. Sisters of Charity of New York served the people of The Bahamas from 1889 to 2007; our missions in Guatemala since 1971 continue to thrive.

Now in our third century of service, the Sisters of Charity of New York continue to meet the challenges of the times and minister to the needs of those living in poverty. The Congregation’s story begins with the story of Elizabeth Ann Seton, who was later canonized as the first American-born saint.

Read more about Elizabeth Ann Seton in this brochure.

Additional historical material may be found in Resources.