Venerable Pierre Toussaint and the Sisters of Charity of New York 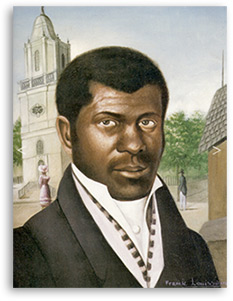 The humble, gifted Pierre Toussaint (1766–1853) had a deep connection to the Sisters of Charity of New York. Pierre, the slave of a wealthy French planter, came to New York from Haiti in 1787. Pierre’s master lost his wealth and died, leaving his wife a destitute widow. As a slave, Pierre was permitted to work and collect wages as a hairdresser. Soon he became the most skilled coiffeur in the city, and earned the confidence and friendship of his clients. As he made his rounds from one fashionable home to another, he was able to collect many donations and distribute them to the poor.

Pierre became devoted to the Prince Street Asylum run by the Sisters of Charity. Not only did he collect money for them, but he became a frequent and welcome visitor to the orphanage and a devoted friend to Sister Elizabeth Boyle, the Superior, and the sisters who ministered there.

When Pierre’s sister was stricken with cancer, Pierre and his wife adopted her infant child, Euphemia, who was also ill. Every year on September 16th, the feast of Saint Euphemia, Pierre took his niece to visit the orphans at Prince Street. On the way, they would stop at a bakeshop to fill a large basket with goodies for the orphans.

Over the years, Pierre gave much more to the Prince Street Asylum than goodies. He collected donations for Madame Larue, one of the most faithful members of the Ladies Association. At regular intervals he went from house to house recording the name and amount given by each subscriber. When Madame Larue went abroad to live, Pierre took on the full responsibility of her charitable work with the orphans. After the death of his beloved Euphemia at the age of 14, Pierre redoubled his work for the orphans, collecting personally more than one-third of the annual contributions to the Asylum. He also began the first school in the city for black children.

Pierre Toussaint is the only layperson buried in St. Patrick’s Cathedral; his remains were transferred there in 1989 from St. Patrick’s Old Cathedral on Mott Street. He was declared Venerable in 1997 by St. John Paul II.

He said, “I have never felt I am a slave to any man or woman but I am a servant of Almighty God who made us all.”