The Villa at Mount Saint Vincent

Then & Now by SC Archives 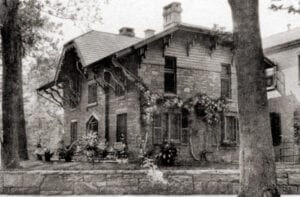 The Villa is a 19th century cottage, one of three original structures that com­prised the Fonthill estate when the Sisters of Charity of New York purchased the property in 1857. When the Congregation had to relocate the first Motherhouse and girls’ Academy of Mount Saint Vincent from McGown’s Pass, Manhattan, for the construction of Central Park, the sisters’ preference was to relocate to the “Hudson River above Spuyten Duyvil and below Dobbs Ferry.” After viewing several estates, they decided to purchase the Fonthill prop­erty in Riverdale in the Bronx from Edwin Forrest, the celebrated Shakespearean actor.

The three original structures included the fieldstone barn, today’s Boyle Hall, and the next-door cottage known as “The Villa,” the latter described to appear like a “farmhouse at the edge of a deep woods.” Prior to the sisters’ residency, Forrest occasionally remained in the cottage while he inspected the build­ing of his riverfront Castle, planned as a home for himself and his new wife. Due to an early divorce, Forrest never did establish residence at Fonthill, and was ready to relin­quish the property less than 10 years later, as the reminder of domestic unhappiness.

Architecturally eclectic and skillfully crafted in English style, the two-story landmark Villa is of massive-faced rusticated fieldstone, quarried nearby. The interior is two rooms deep, and two rooms wide, separated by a center hall. Three-dimensional vertical glass panes also flank the front door, and the diamond-shaped motif recurs in a pyramidal design above the portal, with diamond-pane casement windows. Gray shingling extends directly below the eaves of the gambrel roof. Broken lintels and curvilinear wooden brackets, also gray, produce a gingerbread effect. 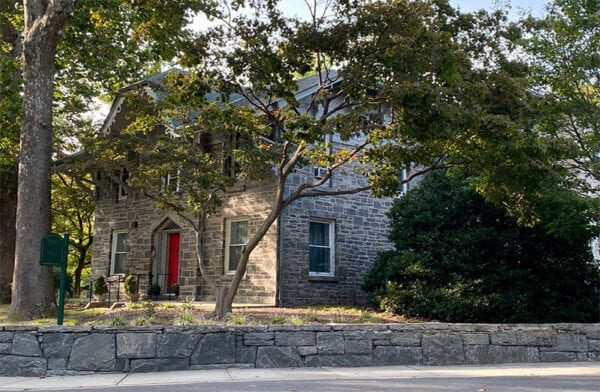 Despite its charm, the small cottage on the grounds was unsuitable for the site of the relocated girls’ Academy. Initially the home of a caretaker, the rent in 1876 was $75 annually. By this time, a grotto and shrine with goldfish pond had been erected near the cottage. From 1887 until 1910 it became the temporary location of a school and dormitory for displaced students from St. Aloysius Academy, Yonkers, when the school was destroyed by fire. Among these fifteen students was ten-year-old Lionel Barrymore, a pupil in early 1888. In October 1895, Master Eugene O’Neill, age seven, was enrolled by his actor father in the cottage school and remained there until 1900. In O’Neill’s Long Day’s Journey Into Night, the description of the shrine at a convent school resembles Lourdes Grotto, now overlooking Forrest’s goldfish pond. When the College of Mount Saint Vincent opened in 1910, the boys vacated the premises.

Renamed Lourdes Villa, the cottage provided dormitory accommodations for college students. During the 1920s and 1930s, part of the cottage was the campus tearoom. In 1942, after the interior was remodeled, the building became the College priests’ residence. From 1952 to 1959, Archbishop (later Cardinal) Paul Yu-Pin of Formosa lived at the cottage.

Today the Villa is home to sisters who work at Sisters of Charity Center in Leadership and administrative roles.