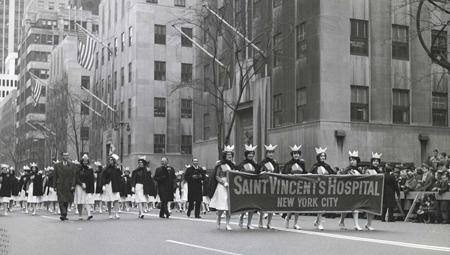 Celebrating St. Patrick’s Day each March 17 by participating in the parade up Fifth Avenue is a tradition embraced by the Sisters of Charity of New York. The holiday celebrates Irish culture and heritage and the arrival of Christianity in Ireland. St. Patrick, the patron saint of Ireland, promoted and converted the Irish to Christianity during the fifth century.

The proud Irish heritage of many of the Sisters’ families is documented in the archives of the Community. For more than two centuries, many who joined the Congregation had Irish surnames. This reflects the large influx of Irish immigrants to New York City throughout the 19th and early 20th centuries. Some of the names in the annals of Sisters’ records appear multiple times. Names common to Congregation members include: Murphy (56); O’Brien (42); Kelly (38); Walsh (35); Ryan (26); Brennan (25) and Sullivan (24). Additionally, Sisters’ surnames beginning with ‘Mc’ number 291 individuals.

To commemorate the 200th anniversary of the Community in 2017, the Sisters of Charity marched in two parades celebrating St. Patrick’s Day. On March 17, a contingent of Sisters, Associates, and friends marched along Fifth Avenue. On March 18, the Sisters, Associates and SC ministry staff again marched in the Yonkers St. Patrick’s Day parade, dedicated in honor of the Sisters of Charity of New York.

The faculty and students from St. Vincent’s Hospital School of Nursing in Manhattan marched in the parade every year until the school’s closing in 1999. The student nurses were recognized for their group’s precision, winning several awards. In 1992, the marchers were presented with the award for “Best Overall Marching Unit” at the parade. An item in the Archive collection, a porcelain decorative urn with lid, manufactured by the Irish company Beleek, notes this distinction in gold lettering. The St. Vincent’s Hospital School of Nursing Alumni Association continues the annual tradition. 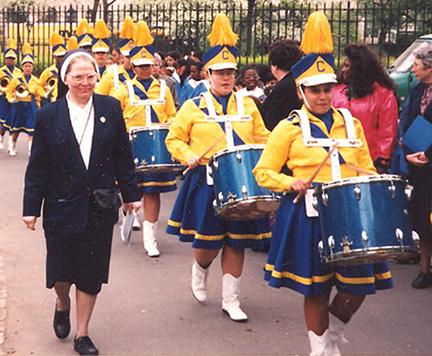 For several years, the Cathedral High School marching band has participated in the Parade, often leading the procession. The Sisters of Charity of New York taught at Cathedral High School for decades; over 400 Sisters also graduated from the high school. From 1980 to 2005, Sister Eileen Regina Leonard (1923 – 2011) led the marching band, The Cardinals, founded in 1980 with Terence Cardinal Cooke. Sister Eileen Regina marched with the band in 30 parades annually, including the largest, the St. Patrick’s Day Parade. She marched with the band until “her knees gave out.” Afterwards, she was driven in a golf cart alongside the marching band. For Sister Eileen Regina the band was, “one of the best things in my life.”

Hopefully, the streets of Manhattan will resound once again with the bagpipe music of marching bands, cheers of enjoyment, and when everyone in New York City is Irish for one day!