The Martyrs of Quiché 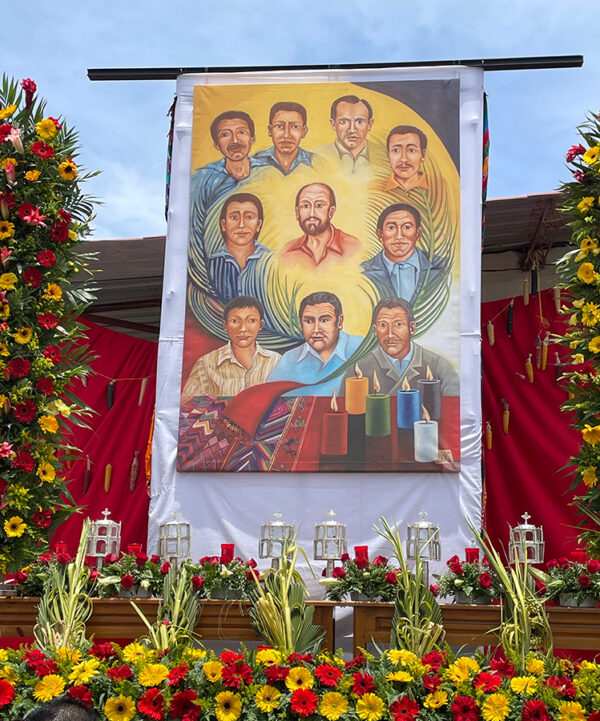 A banner showing the 10 martyrs hangs above the altar at the beatification ceremony.

On April 23, 2021, in a moving ceremony conducted outdoors under a clear blue sky, ten men were beatified as martyrs in Santa Cruz, Quiché.

The men, three missionary priests from Spain and seven native lay catechists, gave their lives for the faith during the time of the violence in Guatemala. The oldest was born in 1914, the youngest in 1967. All were martyred in the early 1980s.

The ceremony of beatification began with a procession of young people from several of the villages where the violence was most severe. Dressed in the “traje” of their local aldea, their presence indicated a moment of new life and possibility for the Maya community who lost almost 200,000 people during the 36-year conflict.

Pope Francis was represented by the Apostolic Delegate to Guatemala, who conveyed the Pope’s prayers and well wishes to those gathered to witness the beatification.

Mass was concelebrated in three languages: Spanish, Quiché and Ixil, by a large number of bishops and priests from Guatemala and beyond. The ceremony was a joyous expression of faith and hope enhanced by the music, choir, abundance of flowers and palms everywhere, and the almost 5,000 people in attendance.

In one of the most solemn and moving parts of the ceremony, ten men processed to a side altar carrying relics of the martyrs. They were accompanied by two companions carrying red roses and palms. Above the altar was a large banner containing the images of the newly beatified  surrounded by light and the palms signifying martyrdom.

Sisters of Charity from Novillero and Quiché, members of the formation community, and visiting Sisters Sheila Brosnan and Mary Mc Cormick attended the ceremony. All agreed that the powerful and moving event in the life of the Guatemalan Church will stay with them.