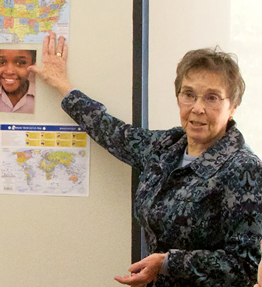 The days between 9/24 and 9/28 were grace-filed – beginning with Vespers at St. Patrick’s Cathedral where I sat in Row 72 at 3 pm waiting for Pope Francis to arrive. I waved to many Sisters I had come to know because of my position at ACWR (Archdiocesan Council of Women Religious) and as Co-Chair of CRC-STOP (Coalition of Religious Congregations to Stop Trafficking of Persons). I felt united to so many religious who are concerned for those in need.

Francis evoked spontaneous applause when he expressed his esteem and gratitude to religious women of the US: “What would the church be without you — women of strength, fighters with that spirit of courage — which puts you in the front lines in the proclamation of the Gospel?”

When the Pope was led to the side altar for prayer and the screens focused on his bent head and closed eyes, there was utter silence in the cathedral, and I believe we were all drawn into his deep space of prayer, and it remains with me today, hopefully, as a lasting memory and aid to be in the front lines in the proclamation of the Gospel.