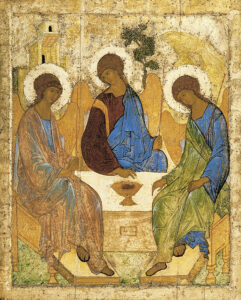 Have you ever wondered about the number of times in a single day you make the Sign of the Cross? I hadn’t really thought about it until I was recently waiting for a Saturday 5 PM Mass to start and was watching a mother trying to teach the Sign of the Cross to her 4-year-old son.

“Mom” was becoming more and more frustrated at her son’s wild gestures (reminiscent of signs a baseball coach might send a player on the field) which only seemed to delight her son, whose movements became more and more exaggerated. All this provided an endless cycle of entertainment for those of us sitting nearby – you’ve got the visual!

In today’s readings we experience a gradual unfolding of the Trinity. We first hear Moses reminding his people, the Israelites, of all of the wonderful and powerful things God had done for them in claiming them and marking them as his people and promising them an inheritance if they keep his laws.

Then we hear Paul speaking to the Romans centuries later, of their relationship to God, this time as equals and heirs with Christ if they accept and unite their sufferings with Him. Once again marked by God.

Matthew gives a brief but powerful description as the disciples receive very clear instruction to “Go out and make disciples of all nations, baptizing them in the name of the Father, and of the Son, and of the Holy Spirit.”

As we move our right hand, we say those very words to center our prayers, to give and receive grace. In so doing we become conscious of God’s presence in all God’s forms: parent figure, human friend and brother, and advocate bestowing on us gifts to help us live fully as believers in the Gospel story. We have been marked with God’s Being, the Trinity, first at our Baptism, and at every Sacrament we have received since.

An early Church Father, Tertullian (c. 250), the first to coin and use the term “trinity,” writes, “In all of our travels and movements, in all our coming in and going out, in putting on our shoes, at the bath, at the table, in lighting our candles, in lying down, in sitting down, whatever employment occupies us, we mark our foreheads with the sign of the cross.”

I don’t have a clear recollection of learning how to make the Sign of the Cross, (I’m pretty sure I presented a similar challenge to my mother as the youngster I witnessed did) but I’ve begun to think about how often and when and why I do.

As we celebrate the Solemnity of the Trinity and as we are called to read and respond to the signs of the times in our own lives, we too become Signs of the Cross for all we encounter, so that every work we do, as Tertullian describes, we do in the name of the Father, and of the Son, and of the Holy Spirit. May the number of those works be immeasurable!

Maureen Reiser, an Associate of the Sisters of Charity since 2017 and a former educator, currently serves as Director of Associates for the Congregation.