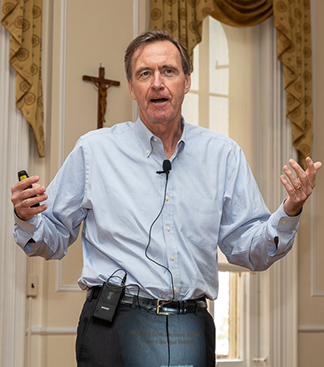 Chris Lowney, a renowned writer and leadership consultant, addressed a gathering of almost 100 sponsored ministry executives and staff members at the 2019 Sponsorship Conference on Tuesday, October 29, 2019. The day’s topic was decision-making based on spiritual values. Mr. Lowney was followed by Sister Mary Mc Cormick, who provided an insight into how Saint Elizabeth Ann Seton, foundress of the Sisters of Charity, approached decisions in her own life.

He continued by looking at good leaders: they tend to be self-aware; they have a sense of their strengths and weaknesses, their values, their outlook on the world. Next, they have ingenuity: they are open to change. Only those who can keep improving and adapting will lead well. Thirdly, they have heroism, not being famous or performing acts of death-defying courage, but heroism as in self-sacrifice. Heroic leaders motivate themselves with goals that are bigger than their egos. Finally, he spoke about love, treating people in a way that respects their human dignity and potential. 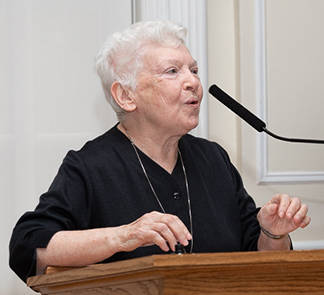 How did Saint Elizabeth Ann Seton approach the crucial decisions in her own life? Sister Mary McCormick addressed this topic with the group. Elizabeth Ann possessed the virtues of courage, temperance, faith, love, and service to others, virtues that guided the difficult decisions in her life. Some decisions she made can be viewed as difficult, conscious, uncomfortable, or loving.

The most difficult decision she made was to enter the Roman Catholic Church. Why? The consequences of her decision were going to be far-reaching, affecting not only herself and her children, but also, as we now know, the future of the first American community of women religious in the U.S.

Elizabeth Ann’s decision to send three Sisters to New York in 1817 was a loving decision and one that would eventually and personally impact everyone attending the conference.

Elizabeth Ann knew the need was there and that the need was great. Though she had few Sisters to spare, she believed in her heart that she needed to return something to the city and the people that had shunned her. Three Sisters, Rose White, Cecelia O’Conway, and Felicita Brady arrived in New York to care for orphans. The orphanage at St. Patrick became the first ministry of the Sisters of Charity in New York. Every service within their power became the watchwords of the generations of Sisters that followed. And the mission continues.

The combination of Ignatian spirituality and the legacy of St. Elizabeth Ann Seton proved to be inspirational and compelling for conference attendees, who expressed appreciation for speakers Chris Lowney and Sister Mary Mc Cormick, and for the opportunity to come together with their colleagues in the mission of charity.