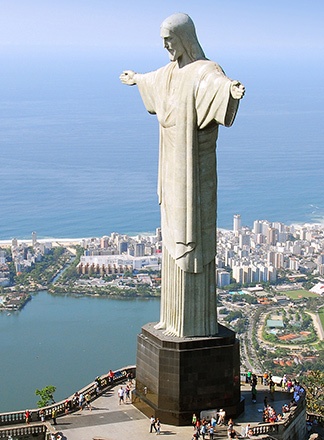 Fans of “Downton Abbey” or “The King and I” have a certain image of what it means to be a king/queen: a ruler who is born into a semi-divine state of privilege, an absolute monarch who exercises power without question. The rest of humankind is expected to offer him/her obedient homage and keep a respectful distance. This sort of ruler was certainly not the model envisioned for our system of government by the founders of our country. And this sort of ruler was totally not the kind of leader that Jesus modeled, or the ruler that today’s solemnity celebrates.

This feast at the end of the liturgical year invites us to ponder the “big” end: the end of time, when all created things reach the fulfillment that God has always intended. In his letter to the Colossians, Paul names Christ as the best expression of this goal, the one in whom “all fullness was pleased to dwell” — in Teilhard de Chardin’s words — the “Omega Point.”

Today we share some (borrowed) thoughts about Christ as “King” and the meaning of God’s reign (= kingdom).

…[W]hat the Gospel makes clear is that Christ is a very different kind of king. His coronation was the cross. …The death of Jesus was the antithesis of unjust secular power, whether in the shape of political systems or personal vice. The world screams, “Save yourself!” Jesus instead turns to help another, “Today you will be with me in Paradise.”

Jesus wants to make it understood that above and beyond political power there is another even greater one, which is not obtained by human means. He has come to earth to exercise this power, which is love, by bearing witness to the truth…, the divine truth which ultimately is the essential message of the Gospel: “God is love” (1 Jn 4:8); and he wishes to establish in the world his kingdom of love, justice and peace. And this is the kingdom of which Jesus is king, and which extends until the end of times.

History teaches us that kingdoms founded on the force of arms and on the abuse of power are fragile and sooner or later collapse. But the Kingdom of God is founded on his love and is rooted in hearts…, conferring peace, freedom and fullness of life upon those who embrace it…. Allow the love of God, the Kingdom of God, the love of Jesus, to take root in your heart and you will have peace, you will have freedom and you will have fulfillment….       – Pope Francis, Nov. 25, 2018

To profess myself a Christian is to profess a desire — and that desire is to follow behind the Lord, Jesus Christ. Perhaps “follow behind” doesn’t quite get to the heart of it. It’s more accurately a “stepping into his shoes” such that I start to look at the world the way Jesus does, start to catch the meanings he reads as he looks out at life….

What does Jesus see?…. The wrap-around compassion of his beloved Father, this expanse of goodness and love Jesus calls the Kingdom of God. Looking through this lens, he notices the behaviors and attitudes that sync with what existence is like inside that Kingdom, that world of abundant mercy and concern for the other…. He’s moving from a “Kingdom perspective,” the one that privileges the pure of heart, and the peacemakers, and those who thirst after justice, and all those other beatitude traits….

All our worship and prayer and our Vincentian practices are meant to take us inside and behind Jesus’ eyes, to lead us into his way of perceiving. They would have us “step into his shoes” and view the world from just that stance. Following the Lord Jesus means more than doing what he does. It means coming to see as He sees, developing our ability to react with his reactions, and catching those meanings of his dear Father which he picks out in all the corners of life.

Because of (Jesus) whom we’re called to follow in our faith,…and especially because we are continually invited to share in the Lord’s Eucharistic supper, we become more and more able to spot and do the Father’s will not just as it is in heaven but, in the words of the Our Father, as it is here on this earth.

Sr. Regina, a writer, retreat leader, speaker, and spiritual director, serves as Charism Resource Director for the Sisters of Charity of New York.