Education in The Bahamas

The second Sisters of Charity mission* outside the United States was Nassau, Bahamas, an island colony of the vast British empire. When Archbishop Corrigan asked Mother Ambrosia Sweeney to send sisters there, she remarked that “This mission was the closest we have come thus far to the Vincentian concept of charity.”

It was a surprising place for the community to choose as a missionary endeavor. The language spoken was English, but little else was familiar. The state religion was Anglican and the national anthem was God Save the King. Money was counted in pounds, shillings, and pence, and Thanksgiving Day was just another Thursday in November. There were no Roman Catholics except for a few representatives from foreign governments. (Today, Catholics are about 12 percent of the population.)

There is, though, an American connection: many Bahamians are descended from a group of Loyalists from the southern colonies who chose not to become part of the United States in 1783, emigrated to the Bahamas, and brought their slaves with them. Slavery was abolished in Great Britain, and also in the Bahamas, in 1834. Today Black Bahamians comprise about 90 percent of the population of about 400,000, and White Bahamians, 4.7 percent. 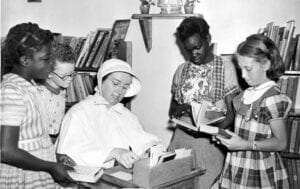 Five Sisters of Charity arrived with three graduates of the Academy to assist them, on October 28, 1889. One week later they began St. Francis Xavier, the first parish school in the country. Two months later, in January 1890, they started St. Francis Xavier Academy, a select school for girls, which later became Xavier College, and more recently Xavier Lower School. A second school, Sacred Heart, was established in the area known as “out east” in 1893. No other schools were started for thirty years.

Life was hard for the early sisters on this tropical mission. There was very little by way of fresh milk, vegetables, and meat, although there was much fresh fruit. After their wells were shut down the water became almost undrinkable.

The sisters wore a habit of black merino wool until 1923, when they were permitted to wear white. (At this time they were also dispensed from wearing the shawl, gloves, and outdoor bonnet the sisters in the north were required to wear!)

The early schools were primitive. Parishes were poor and could provide little but the basics: a parish hall, some chairs that became desks when the children needed to write, a few books. School didn’t start until 10 a.m. so the children could help with the chores at home and sell their produce in the marketplace. School ended at 1:30 to allow the sisters to do home visiting in the afternoons. They were also responsible for the upkeep of the parish church connected with their school: they cleaned, washed and ironed the altar linens, and attended many evening services, including rosary, holy hour, and Benediction. 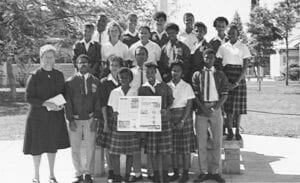 Beginning in 1926 other schools opened whose names many Sisters of Charity have long been familiar with, including Our Lady’s, the largest and perhaps best known, St. Joseph’s in Baintown, and St. Anselm’s in Fox Hill. In all, eleven schools were opened in Nassau, and two on Harbour Island. Sisters also spent time on the Out Islands during the summer, hosting catechetical and summer enrichment programs.

In 1974 Xavier Academy merged with Saint Augustine College, founded by the Benedictines in 1945. Teachers included the monks, whose community had arrived in 1893, Sisters of Charity, and a large lay staff from the United States and various parts of the British Commonwealth.

In the one hundred eighteen years of Sisters of Charity presence thousands of children were given an education in these schools that placed many of them in the forefront of Bahamian political, economic, spiritual and cultural life before and after independence was attained in 1973.

The schools started by the Sisters of Charity continue today to provide quality education for the children whose forebears came to know and love their American sisters.

In his history of Catholics in the Bahamas, Colman Barry, OSB, pays this tribute to the Sisters of Charity:

… their coming to the Bahamas was the single most important development of Catholicism… the very presence of these women, their selfless devotion to the poor and needy, their love and patience with the children, have made a lasting impression on Bahamians of all persuasions. (Colman Barry, OSB, Upon These Rocks, Catholics in the Bahamas)

*The first foreign mission, in Halifax, Nova Scotia, in 1849, became an independent congregation, the Sisters of Charity – Halifax, in 1855. Material from: The Sisters of Charity of New York by Marjorie Walsh, SC; From the Void to the Wonderful by Patricia Gladstone Meicholas; A History of the Bahamas by Virginia Unsworth, SC.