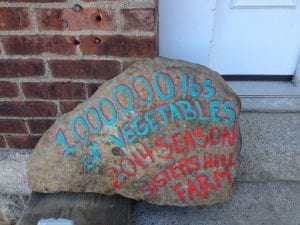 Sisters Hill Farm ended its 2014 season in November with a milestone achievement: one million pounds of vegetables harvested since the farm was started in 1998. Since its inception, the farm has donated one tenth of its produce to charity, bringing that total to 100,000 pounds. The Community Supported Agriculture (CSA) farm is located in Stanfordville, New York, and is a sponsored ministry of the Sisters of Charity of New York.

Under the direction of Sister Mary Ann Garisto, SC, Sisters Hill Farm was organized in 1996 with a mission to grow healthy food that “nurtures bodies, spirits, communities, and earth.” Farming commenced in 1998 with 41 shareholders. Since its beginning, shares has been distributed weekly at the Dutchess County farm as well as at Mount Saint Vincent, home of the Sistes of Charity. Today, SHF provides its 235 shareholders with nutritious, chemical-free, wholesome food grown using organic methods, and an opportunity to grow in friendship and mutual support of the earth. Farmer Dave Hambleton and the young apprentices he trains and mentors harvest 80,000+ pounds of produce from seven to eight acres. Each week, the farm donates ten percent of its fresh produce to individual families, to soup kitchens, and to organizations serving the materially disadvantaged in both New York City and Dutchess County.

Sisters Hill Farm is now in the process of preparing the soil for next season. Harvesting for the 2015 season commences in late-May. Congratulations to Sister Mary Ann, Farmer Dave, the apprentices, all our volunteers, and the many who support the farm and our mission.