In 1822 the Sisters of Charity sent by Elizabeth Ann Seton to staff the Roman Catholic Orphan Asylum opened the first free school there at St. Patrick’s at Mott and Prince Streets. In 1866 it became the first and oldest parochial school in New York City.

St. Patrick’s Old Cathedral School served successive waves of immigrant children until 2010. Now as the new Archbishop Hughes Center, the teaching tradition of the Sisters of Charity continues this summer at an inaugural children’s Summer Music Camp from July 24th to 28th.

This summer learning experience for children in grades two to seven features the historic 150-year-old Henry Erben pipe organ, the “King of Instruments,” which was heard by the city’s struggling immigrant families and the Sisters of Charity who were devoted to them. 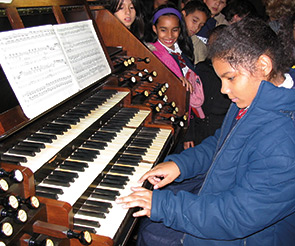 Each day, students will discover different orchestral instruments through the lens of the monumental pipe organ. Teaching activities will include interactive science workshops focused on the physics of sounds, singing, English hand bells and hand chimes, movement/yoga, creative arts projects, and more.

The program is offered by the Basilica of St. Patrick’s Old Cathedral, Camp Rhythmo, and Friends of the Erben Organ. The latter group is a new non-profit formed to restore, preserve, and maintain the 150-year-old organ as well as offer instruction and performances. For further information, register online www.CampRhythmo.org or email organist@oldcathedral.org.