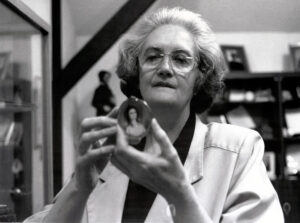 The following is from the Spring 2021 issue of Vision.

As an educator and archivist, Sr. Rita King’s career has been steeped in the pursuit of history. A Yonkers native, Sr. Rita attended St. Mary’s Elementary School and St. Barnabas High School. She earned a bachelor’s degree in History from the College of Mount Saint Vincent, and a master’s degree in American History from Catholic University of America. She entered the Community in 1948.

Sr. Rita was inducted into the Hall of Fame at St. Barnabas High School in 2008, when she was honored for her years there as a teacher and later as a volunteer. Sr. Georgette Dircks, in trib­ute to Sr. Rita, said, “We admire Sr. Rita not only for her competence, but for her wealth of knowledge, her generosity, her genuine interest in the students and her altogether fine character.” These same qualities define her role as Archivist.

In 1990, Sr. Rita was selected by a search committee to work as an intern to Congregation Archivist, Sr. Anne Courtney. During this time she avidly pursued coursework in archival educa­tion and quickly adapted to her new professional role.

By 1993, Sr. Rita was directing a comprehensive agenda to mentor Sr. Melrose Hajduk, OSF, a Bernadine Franciscan, for an intensive one-week internship at the Archives. When computers became essential in the Archives, Sr. Rita pioneered creating a database of records, entering informa­tion for over 4,000 sisters’ records. Sr. Rita demonstrated a lively approach to teaching during her tenure as Archivist, serving as in-house Museum tour guide to school groups and to freshmen during orientation week at the College of Mount Saint Vincent. 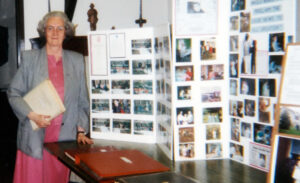 During an oral history interview in 2018, Sr. Rita described her days as Archivist: “It was very interesting, … researching requests, putting together information; it was a day-to-day process. I put together an internship program. I wrote down everything that should be taught to an archivist: appraisal, arrangement and description, acquisition, provenance, original order, finding aids, preservation, conservation and reference services. I taught this class at workshops.”

Sr. Rita served an organizational role in Catholic archivist groups. She joined the first meetings that led to the establishment of the Archivists of Congregations of Women Religious (ACWR) and was elected Vice President/President Elect. Speaking at the plenary session in 1997, at the ACWR Second National Conference in Sinsinawa, Wis., she stated, “Archives are the places of memory of the Christian community.… ACWR will provide us with the opportunity to share ideas, and establish a network of colleagues from across the U.S. and Canada…. Most of us have come from years of experience in the field of education, social work, health care; we bring these skills to the administration of our archives—to our dual role of preserving the past and documenting the present.” During her two-year tenure as president she presided over the ACWR National Conferences and contributed a column to its newsletter.

In recognition of her expertise as a religious congrega­tion archivist, Sr. Rita was asked to be a consultant to the U.S. Catholic Documentary Heritage Project in 1998. The program sought to provide access to Catholic history online to congregations and diocesan and academic institutions. Simultaneously, Sr. Rita served on the board of the New York metropolitan area group, Archivists of Religious Institutions.

Are you enjoying these articles from Vision? Read a PDF of every issue online, or subscribe to the print version, and we will mail Vision to your home or office, free of charge.