On October 25, 2019, the Federation of Diocesan Liturgical Commissions in Washington, D.C., issued the following statement:

On the fiftieth anniversary of the Federation of Diocesan Liturgical Commissions, it was indeed appropriate that the members recognize someone who has given decades of service to her archdiocesan commission and to the FDLC. They looked no further than Sr. Janet Baxendale, a Sister of Charity in the Archdiocese of New York. 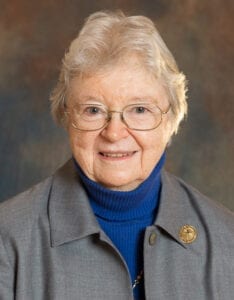 Her love of the Federation goes back to our earliest days. As national process facilitator, Sr. Janet developed the procedures that are still in place today. She served on the FDLC Board of Directors from 1978–1985 and served six years on the Executive Committee — two terms as Vice Chair and two years as Chair (1982–1983). During that time, the FDLC saw enormous development in the function of the Board and national office.

Sr. Janet was unable to be present to receive the award; her successor in the Archdiocesan Liturgy Office, Fr. Matthew Ernest, accepted the award on her behalf. He remarked:

“As you know, the theme for our gathering during this National Meeting has been ‘Prayer Without Ceasing,’ a reminder that our prayer and our work of fostering the liturgical apostolate is meant to be marked by continuity, the passing from one generation to the next of our apostolic faith in Christ and our liturgical traditions and expressions. I am grateful for this opportunity to speak briefly on Sister Janet’s behalf this evening, inasmuch as I have been a witness to the way in which she has lived out that mission.

“I first came to know Sister Janet as a seminarian placed under her tutelage, and it was in her classes that she, with her characteristic enthusiasm and tenacity that is well known to so many of us, carefully introduced me and my classmates to the history, theology, spirituality, and pastoral aspects of the Church’s liturgical life. In those sessions, we were challenged to expand our understanding of the liturgy beyond simply what we had experienced in our parishes growing up. We were faithfully instructed in the liturgical documents associated with the Second Vatican Council and asked to apply these teachings and lessons to the way we would one day celebrate Mass and the sacraments… These were all lessons that have served me very well throughout my priesthood, most especially in those first formative years of ministry.” 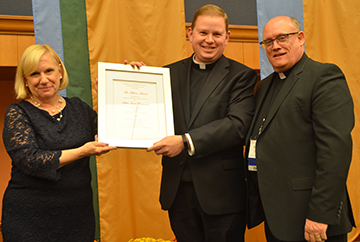 Fr. Matthew Ernest of the Archdiocese of New York accepts the Alleluia Award on behalf of Sr. Janet Baxendale, SC on October 11 in Chicago. The award honors outstanding contributions to the work of the Federation of Diocesan Liturgical Commissions (FDLC). Pictured (L-R) are Rita Thiron, Executive Director of the FDLC, Fr. Ernest, and Fr. James Bessert, FDLC Board Chair. Photo by Christopher J. Ferraro for the FDLC

“Sr. Janet is such an exemplary model of what it means to be a liturgist who ensures that the Church ‘prays without ceasing.’ Her generosity in handing on the Church’s liturgical theology and traditions to the next generation is something that I have been privileged to witness firsthand. I know that in this room, I am not alone in feeling a deep sense of gratitude to her for all that she has contributed to the Church’s liturgical life both in New York and throughout the United States… Inspired by her life’s work, may we pass the torch she has so faithfully given to us to the next generation, as we play our own part in carrying on the Church’s mission to ‘pray without ceasing.’”