This is the first in a series highlighting the contributions of sister archivists. 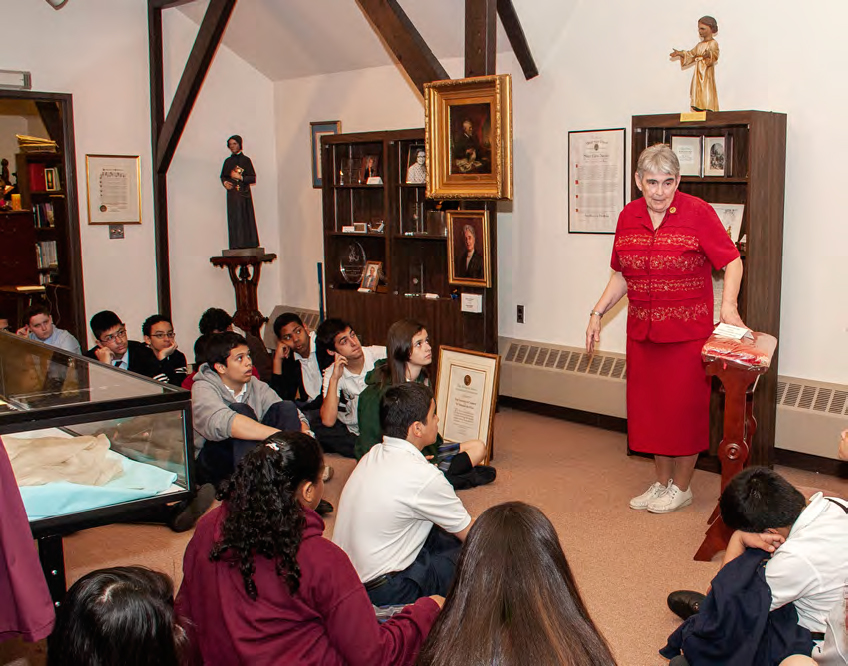 Sr. Connie shared the history of the Sisters of Charity with students from Visitation School in the Bronx in 2012.

A Sister of Charity for over 64 years, Sr. Constance Brennan was a librarian for 21 years, an archivist and docent for eight years, and a teacher for her lifetime.

Sr. Constance began her religious ministry in elementary education as a teacher and librarian, an experience which lasted for 33 years at Our Lady of Angels and Visitation in the Bronx, St. Joseph Academy in Manhattan and St. Joseph in Yonkers. At the high school level, she expanded her tutelage as a director of audiovisual media at the Academy of Mount Saint Vincent, Tuxedo Park and St. Gabriel, New Rochelle. Sr. Connie taught library science and media skills at the College of Mount Saint Vincent. She returned to teach the sixth-grade at Visitation School in the Bronx until 2007 when her second career as archivist and museum docent began.

After attending an introductory workshop sponsored by the Catholic Library Association in October 2007, Sr. Connie began her work at the Archives, which continued until her retirement in 2015. When asked to work at the Archives, Sr. Connie embraced the opportunity to delve into the Congregation’s history. She composed a memoir of those first days, a time when she regarded herself as a student once again, under the tutelage of Congregation Archivist Sr. Rita King.

“In March 2007 I was a busy elementary school teacher involved with my students. Now, March 2008 finds me a busy archivist involved with my Congregation and in love with archival work. I interned for two summers under a master archivist, Sr. Rita King, who organized a professional growth experience which included time for tours, tasks and reading.

“My days were filled with genealogy searches, orphan queries, requests from researchers, quests for long-lost favorite teachers, and questions about great-great aunts who could have been Sisters of Charity. In each request, my mentor, Sr. Rita, was there not to do, but to advise… Is it any wonder that my respect for the archivists that preceded me has grown? …As our ministries evolved, our sponsored institutions adapt with and for the people they serve, our membership increases or diminishes, it is imperative that our past be preserved, and our present be recorded before it is forgotten in the rush so common in this electronic age.”

In addition to the myriad tasks that comprise the daily activities in the Archives, Sr. Connie became involved in arranging museum displays and conducting tours. Her ability to relate to students of all ages was evident as she directed museum tours for primary and secondary students and the general public. Her enthusiastic presentations inspired many College of Mount Saint Vincent newcomers, who visited the Archives and Museum in Boyle Hall during campus orientation. Her passion for conveying the story of Elizabeth Ann Seton—as well as her love of cats— inspired Sr. Connie to write a children’s story. My Life with Eliza by Yankee the Cat was composed as a guide to instruct youngsters about the fortitude and religious devotion of Elizabeth Ann Seton.

During her eight-year tenure, Sr. Connie focused upon answering the many reference inquiries for historical information and photographs to assist staff needs and external researchers.

After the release of Doubt in 2008, a feature film focused on the dilemma of Sisters of Charity as teachers and caregivers, requests for information about the sisters grew. Community productions of Doubt in the metropolitan area led to dozens of appeals for the loan of the traditional Sisters of Charity habit. Sr. Constance responded diligently to these requests, documenting the loan and receipt of textiles, which continued for several years.

While attending Archivists for Congregations of Women Religious (ACWR) meetings, Sr. Connie served on the 2012 conference Scholarship Committee, significant in that the event became the framework for subsequent conferences. Sr. Connie is remembered for her great interest in maintaining the Community’s history by the ACWR archivists, who expressed condolences upon her passing on September 26, 2020.

The numerous projects that Sr. Constance assumed during her involvement as archivist and docent proved the culmination of her extensive experience as a teacher and librarian. Her knowledge and enthusiasm were evident as she embraced this second career with the same dedication that characterized her devotion as a Sister of Charity.