Mary De Angelo always said that she knew John was the one for her the first time she danced with him at her office’s Christmas party on that momentous day in December.

Handsome and lean, he was nicknamed “Jackson” by residents of Little Italy in the Bronx because of his baseball skills. He received a call to try out for the minor leagues, but World War II intervened, and John deployed to the Pacific Front in the early days of the war.

After three years in the Pacific, John returned home to visit friends in his former workplace and was invited to the Christmas office party. Yes, the same place where Mary was the receptionist. 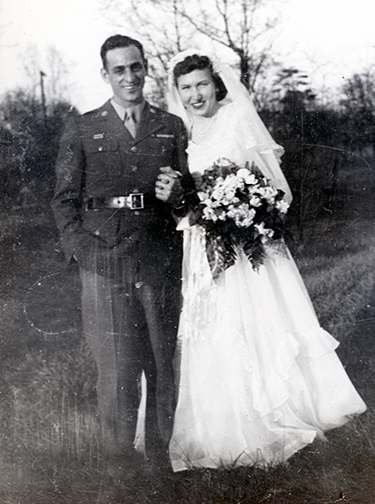 John and Mary De Angelo lived happily ever after.

John was drawn to Mary the minute he saw her and asked her to go to the Christmas party with him. Engaged to another man, Mary refused. “No,” she said, “I can’t!” Persistent, John went to see her almost daily, just to say hello.

As the official receptionist and greeter, Mary couldn’t escape John’s attention. The Christmas party came, and John invited Mary to dance. Mary’s story to her children and grandchildren through the years was, “I knew the moment I was in his arms that he was the one for me.”

Their romance and love flourished in Grand Central Terminal. Because the war was nearing its end, John remained stateside and served with the Military Police on the trains to and from New York and Washington, D.C.

It was in the darkened Grand Central Terminal that they snatched times to get to know each other. Mary remembered the darkness. Because of the war blackout, the windows were painted black so no light could escape; no sun could come in through the windows. 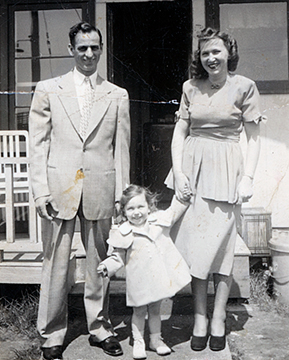 I was the first of six kids born to my parents.

Grand Central Terminal became a major focal point in both their lives as it was for many of our service men and women. Just this past Christmas season, I was in the Terminal with one of the grandchildren, and we took the self-guided audio tour. As happens often, I was asked to share my parents’ story anew. As I recounted the love story yet again, I was reminded of the hundreds of thousands of service men and women who passed through the Terminal and found R&R and dancing at the USO located up the Eastern Grand Staircase in the northeast.

Lest should you worry, Mary’s first fiancé met a wonderful woman and he, too, was happily married. By chance, several of my sisters and I met him and his wife in a store in Flemington, New Jersey, forty-five years after my mother said “Yes” to the love of her life.