Sister Mary Frances Wallace, one of the founding Sisters of Charity of New York, died on this day in 1890 and is buried in the Sisters’ Cemetery at Mount Saint Vincent. 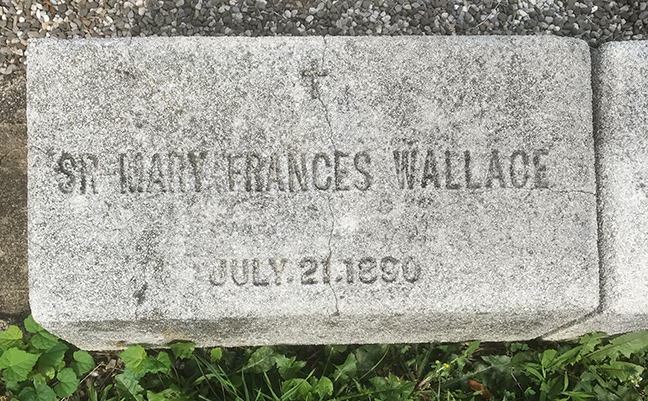 Maria Wallace entered the community in Emmitsburg, Md., in 1832. A few years later, she was sent to St. Peter’s in New York where Sister Mary Jerome Ely had just been named Sister Servant (Superior). The two became and remained life-long friends. After the New York community began, Sister Mary Frances was elected Procuratrix (today we would call her a CFO/COO) and oversaw the new motherhouse and school at McGown’s Pass.

In 1869, when plans for the New York Foundling were in the works, Sister Mary Frances accompanied Sisters Mary Irene Fitzgibbon and Teresa Vincent McCrystal on an exploratory trip to Baltimore, Washington and Philadelphia. There they visited Daughters of Charity institutions and were warmly received by Mother Euphemia, Sister Martha, and Sister Maria Louise, who had served at St. James School in New York in her early days in community.