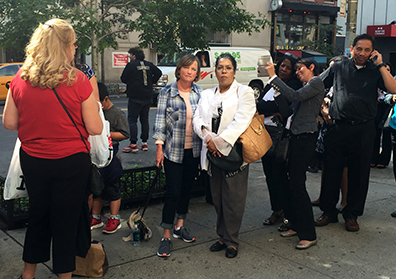 For me, September 25, 2015—the day of Pope Francis’ Mass at Madison Square Garden—was a testament to charity and faith, as well as test of patience.

I was very excited about the opportunity to see and hear Papa Francisco. From the beginning of his papacy, he has touched and impressed me with his grace and humility.

As the daughter of a Cuban immigrant, I saw Papa Francisco’s intervention in initiating conversations between Cuban President Raul Castro and President Obama as a stroke of genius. His visit to Cuba brought tears to my eyes as I watched the people of Cuba cheer for this holy man who brought hope to their lives with the highest power—the power of love—along with his special way of speaking like an “abuelo;” gently but firmly showing you the error of your ways while still loving you.

When I heard Papa Francisco speak during the Mass at Madison Square Garden, I found his voice to be like that of a father reminding us to look out for our brothers and sisters, to be aware of those around us who labor and toil for those who suffer, and for those who need the most help. A testament to charity.

I had the chance of a lifetime to hear the gospel from God’s representative on earth—a testament to faith.

I am glad I remained on line all those hours, a true test of my patience but worth every minute!