SC Archives: Sisters Stand Up to Be Counted for the 1980 Census

The following is from the Summer 2020 issue of Vision.

When the 1980 Census was con­ducted, Sr. Mary T. Higgins was an administrator at Mount Saint Vincent Convent. The sisters who lived at the Convent at that time were deter­mined to be included.

The new mail-out/mail-back enumeration using questionnaires for larger metropolitan areas was imple­mented during the prior census, in 1970. Sr. Mary’s multiple telephone calls to request question­naires were never answered. “They got their forms,” Sr. Mary said of the College, “but when we didn’t get our questionnaires in April, I called the Census Bureau and they said they would get back to me.” 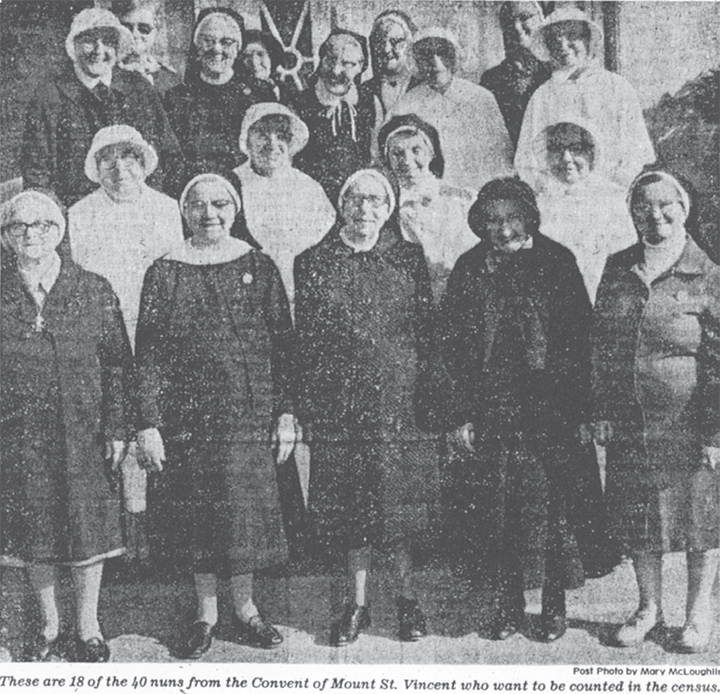 However, despite multiple appeals to the Census Bureau for recognition, their interests were discounted. Sr. Mary believed that this was due to an admin­istrative oversight, by which the Convent was regarded as part of the College of Mount Saint Vincent because of its loca­tion on the same campus. The accom­panying photograph includes 18 of the 40 sisters who stood up to be counted.

“We feel neglected by the United States government. We like our neigh­borhood,” said Sr. Mary, “and we want to make sure it gets all the federal aid and congressional representation it’s entitled to.”

Sr. Mary, now retired and residing at the Mount Saint Vincent Convent, was administrator at the Convent when this article was published. Excerpt from article by Eli Teiber, The New York Post; photograph by Mary McLoughlin, 1980.