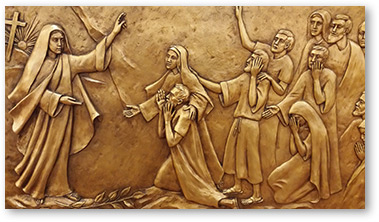 Wisdom from Pope Francis: In 2016, Pope Francis elevated this day to the status of a feast on the Church’s universal liturgical calendar. He officially proclaimed what many of us have come to know — that Mary Magdalene, a woman “exploited and despised,” wrongly labeled for centuries as a (repentant) prostitute, was actually a deeply faithful, passionate, and influential disciple of Jesus. She well deserves the title given her by the Pope: “Apostle to the Apostles.”

At a general audience in May, 2017, Pope Francis reflected again on Magdalene, calling her a model of hope. Speaking of the poignant story recounted in today’s Gospel, he remarked, “It was while she was standing near the tomb, with eyes filled with tears, that God surprised her in a most unexpected way.” At first she did not even recognize Jesus, whom she thought was the gardener; she saw him only when Jesus “calls her by name.” “How beautiful it is to think that the first apparition of the Risen One — according to the Gospels — should occur in such a personal way!” the Pope said. How beautiful it is “that there is someone who recognizes us, who sees our suffering and disappointment, and is moved for our sake, and calls us by name.” Although many people seek God, he said, the “wonderful reality” is that God has sought us first, and sought each of us personally. “Each one of us,” Pope Francis said, “is a story of the love of God. God calls each of us by name.”

Wisdom from Our Sisters: Scholars tell us that there is no Scriptural evidence to back up the labels thrown onto Magdalene over the centuries. Used and abused, vilified and misrepresented, she is a prototype of persons who are cast out, put down and raised up. She is a symbol of the journey of personal and societal transformation that all of us are on.

Our own Sr. Mary McCormick invites us to reflect on that journey in the company of St. Mary Magdalene:

–Excerpted from Sr. Mary McCormick’s 2007 presentation, “Reading Between the Lines”

Sr. Mary is a spiritual and retreat director, writer, and presenter on topics of spirituality and the Charity charism. Currently the Congregation’s Novice/Vocation/Candidate Director, she has served in congregational leadership, formation ministry, education, and as a missionary in the Bahamas and in Arizona.