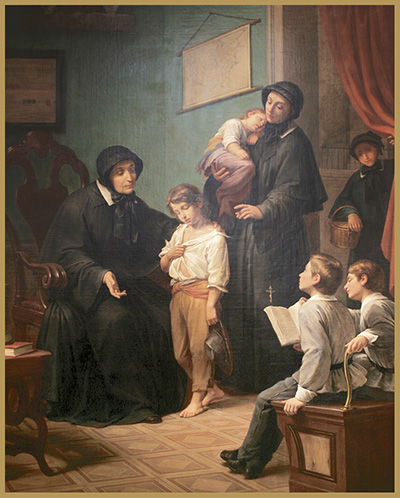 The scene: a group of people gathered at a crossroads. Under the impact of forces beyond their control, they are pushed to make a choice that none of them really wants to make. The choice means that they must undertake a difficult journey and leave behind their home, their roots, all that they hold dear. They will be separated from friends and family. Their motives will be questioned, maligned and misunderstood.

But time is running out; they cannot dwell on their pain, nor on the suffering that surely awaits them. They must choose, act. They must step into a new life.

This could be a story ripped from today’s headlines, perhaps a story about refugees, migrants, exiles on the U.S.-Mexico or any other border.

But it is also the story of the Sisters of Charity who were on mission in the New York diocese in 1846.

As refugees from the Great Hunger in Ireland flooded into New York and other large cities, the community’s clerical superiors in Emmitsburg increasingly clashed with New York’s Bishop John Hughes over control of the Sisters and their ministries. Surely there were legitimate differences of opinion about the mission and its practical consequences. Today we also understand the power and gender dynamics and all-too-human, ego-driven motives that can push already-pressured people against a wall. Differences soon hardened into irreconcilable positions. The Sisters found themselves in the middle.

Without the help of organizational consultants, facilitators, or conflict mediators, each Sister was told to make her own decision, one that she knew would forever change her life. Each had to weigh the solemn responsibilities of the vows she made to the community she had entered in Emmitsburg, against the concrete demands of the mission of Charity, fleshed out in the children placed in her care.

Of the sixty-two Sisters who were on mission in the New York diocese, twenty-nine returned to Emmitsburg. The work of the eight missions opened in New York between 1817 and 1833 was continued by thirty-three Sisters….[T]hese Sisters carried on without interruption the work of three asylums, three academies and three parish schools. (I, 134)

Those who chose to remain in New York were dispensed from their vows to join (if they wished) a new community under the authority of Bishop Hughes, to be known as the Sisters of Charity of St. Vincent de Paul, of New York.

On Dec. 31, 1846, those Sisters gathered in the chapel of the Prince Street asylum to elect their first leaders. Bishop John Hughes and his secretary, Rev. John Loughlin, were present as canonical witnesses. Sister Elizabeth Boyle, who had shared the community’s beginnings and whom Mother Seton had called “dearest old partner of my cares and bearer of my burdens,” was elected Mother General. The Sisters’ wisdom was evident in their choice of seasoned veterans Sisters M. Angela Hughes, Williamanna Hickey, and M. Jerome Ely to assist her as Councilors.

I can’t imagine that any of this was in the Sisters’ plans. I wonder if they found comfort in the words of St. Vincent de Paul: “God has riches in abundance; until now, you have lacked nothing; why are you fearful for the future?” or in Mother Seton’s advice to “meet your grace.”

In hindsight we can see God’s Spirit working through chaos and suffering to create something new. The new community that began on the last day of 1846 has continued to serve the people of God in New York (and beyond). And in 1850 the Emmitsburg community expanded its boundaries and became part of the international Company of the Daughters of Charity that today serves in 90 countries. Through the Sisters of Charity Federation (http://sistersofcharityfederation.org/), past years of separation and mistrust have been transformed into fruitful and loving collaboration, in the spirit and for the mission of Charity.

We often say, “God writes straight with crooked lines.” In his song, “Anthem,” musician Leonard Cohen puts it this way: “There is a crack in everything, that’s how the light gets in.”

Into this New Year of 2019, may we bring all the cracks and broken places in our hearts, our spirits, our families and communities, our world, our universe. May we trust that the cracks will open abundant space for the light and grace and power of Jesus Christ, the God of all charity.

Image: The Sister of Charity by Pietro Gagliardi, 1873

Sr. Regina, a retreat leader, speaker, writer and spiritual director, serves as Charism Resource Director for the Sisters of Charity of New York.