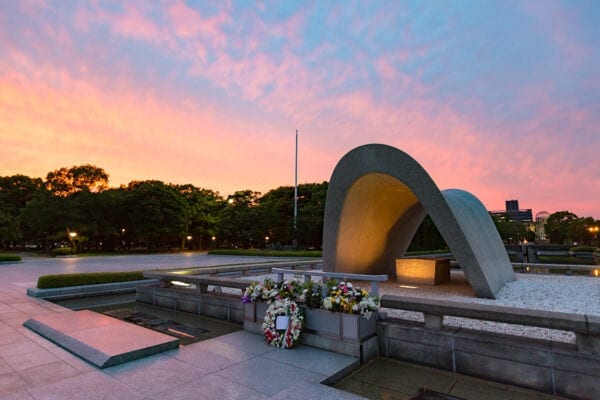 As our attention turns to the upcoming presidential election on November 3, 2020, the Sisters of Charity of Saint Elizabeth, in Convent Station, N.J., asked their Office of Peace, Justice, and Ecological Integrity to prepare reflections that will help to discern and form our consciences during this electoral season. Each week they will share a quote from the United States Conference of Catholic Bishops Forming Consciences for Faithful Citizenship: A Call to Political Responsibility from the Catholic Bishops of the United States, some questions for reflection, and a link to further material to those who would like to take a “deeper dive” into the issues the bishops raise. The Sisters of Charity of New York are grateful to be able to share the reflections created by Father Terrence Moran.

From Forming Consciences for Faithful Citizenship

68,69. Catholics must also work to avoid war and to promote peace. This is of particular importance, as there is a danger in the present time of becoming indifferent to war because of the number of armed conflicts. War is never a reflection of what ought to be but a sign that something more true to human dignity has failed…The United States has a responsibility to work to reverse the spread of nuclear, chemical, and biological weapons, and to reduce its own reliance on weapons of mass destruction by pursuing progressive nuclear disarmament … Though we recognize the justifiable use of military force, we encourage the reallocation of resources from armed conflict to the urgent needs of the poor and the root causes of violence. Further, we support policies and actions that protect refugees of war and violence, at home and abroad, and all people suffering religious persecution throughout the world, many of whom are our fellow Christians.

“The use of atomic energy for purposes of war is immoral. As is the possession of atomic weapons. We will be judged for this.” Pope Francis at Hiroshima in 2019

August 6 and 9, 2020 mark the 75th anniversary of the atomic bombing of Hiroshima and Nagasaki by the United States – the only country to use nuclear weapons in warfare up to this point. In addition to the prospect of ecocide that nuclear weapons present, the amount of money used in the maintenance of a nuclear arsenal is breathtaking. If the U.S. carries out all of its plans for modernizing and maintaining the nuclear arsenal, it will cost $494 billion over the next decade, an average of just less than $50 billion per year. Although the possibility of nuclear war seems remote to many people, the famous Doomsday Clock of the Bulletin of Atomic Scientists says the danger is closer than ever – 100 seconds to midnight.

Deeper Dive:  At this link you can find a wealth of podcasts and videos on issues of peace, nonviolence, and nuclear disarmament from the Catholic Nonviolence Initiative https://nonviolencejustpeace.net/listen-and-watch/ Choose one, encourage a few friends to listen or watch it, and then discuss what actions it might call you to.

Breath of All that Is, preserve us from our own madness. Direct us away from dealing destruction to others, a path which leads to the ruin of ourselves and our world. Protect us. Help us to hear you. Jesus Christ, Beloved, Show us your precious face in all others, you in us, and we in each other, from all places. Teach us how to lower our defenses. Feed us Love which transcends fear. Heal us. Help us to let go of all fear. Holy Spirit, you call us, in our minds, in our world, and through each other. Speak to us. Speak through us. When we worship power, control, money, when we cannot forgive, or shove pain onto others, call us. Light the fire of Love. We will not be afraid. We will not be afraid. Love transcends all fear. You are with us always. Amen.

Courtesy of the Sisters of Charity of Saint Elizabeth, Convent Station, N.J.