Quinnipiac University to host, “The shores of Amerikay: How Archbishop John J. Hughes and the Sisters of Charity of New York met the needs of Ireland’s Famine refugees,” on June 21st 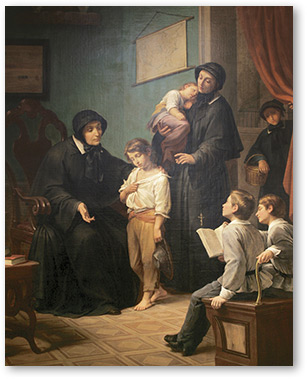 Ireland’s Great Hunger Museum at Quinnipiac University will host, “The Shores of Amerikay: How Archbishop John J. Hughes and the Sisters of Charity of New York met the needs of Ireland’s Famine refugees, a presentation by Turlough McConnell,” on Wednesday, June 21, at 3 p.m.

America’s Irish Famine immigrants were more likely than previous arrivals to be malnourished, unhealthy and members of broken family groups, often children who ended the voyage alone. Irish children needed to be housed, fed and educated.

In response, New York’s Archbishop Hughes, and the Sisters of Charity created institutions for these unfortunates. An attempt in the early 1840s to secure public funding for New York City’s Catholic schools resulted in furor and the creation of New York’s non-sectarian Board of Education. Working in tandem with Hughes, the Sisters of Charity opened, staffed and grew schools, orphanages and St. Vincent’s Hospital.

Informed by primary sources from the archives of the SCNY and the Archdiocese of New York, and the collections of Columbia University, McConnell’s presentation focuses on the critical days when refugees from Ireland’s Great Hunger flowed into the United States.

McConnell is a producer and writer with more than two decades of experience as a creative program executive in the Irish-American market. As president and CEO of Turlough McConnell Communications, McConnell produces live events, multimedia products and documentary films of interest to Irish America, including exhibitions such as the international tour of “Fighting Irish: Celebrating Irish Prizefighters” and “1916–2016: Proclaiming the American Story,” which is scheduled to open later this year at Glasnevin Cemetery Museum in Dublin.

The museum, located at 3011 Whitney Ave., is home to the world’s largest collection of visual art, artifacts and printed materials relating to the Irish Famine. The museum preserves, builds and presents its art collection in order to stimulate reflection, inspire imagination and advance awareness of Ireland’s Great Hunger and its long aftermath on both sides of the Atlantic.

The collection focuses on the Famine years from 1845–52, when blight destroyed virtually all of Ireland’s potato crops for consecutive years. The crop destruction, coupled with British governmental indifference to the plight of the Irish, who at the time were members of the United Kingdom, resulted in the deaths of more than one million Irish men, women, and children and the emigration of more than two million more to nations around the world. This tragedy occurred even though exports of food and livestock from Ireland continued and, in some cases, actually increased during the years of the Great Hunger.