Prophets and Healers for a Time of Division

On January 4, 2021 the Sisters of Charity mark the 200th anniversary of Saint Elizabeth Ann Seton’s entrance into eternal life at a tumultuous time in our nation. We have lived through a historic and contentious election. We are weary from coping with the continuing Covid-19 pandemic and mourning the deaths of more than 300,000 people. We are grieved by continued violence against people of color, by unjust systems that privilege some while oppressing others, and by our often unwitting part in it all. 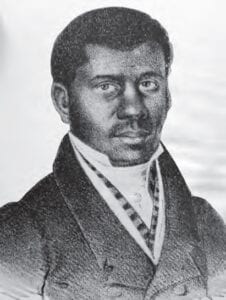 Courtesy of the Black Ministry Office, Archdiocese of New York

Our mission of Charity calls us in part to “reconcile and bring into unity persons and groups who are alienated and divided.” [SC Constitution, “Our Mission in the Church,” #1.4] These times of alienation and division in our neighborhoods, our nation and our world challenge us to ask “Who do I mean when I say us? Who is included, who is left out?” In a spirit of willingness to learn from others’ experience, we might call upon the wisdom of two heroic persons of color, Venerable Pierre Toussaint (1766–1853) and Servant of God Sister Thea Bowman (1937–1990).

Though Elizabeth Ann Seton called herself “a citizen of the world,” the term probably fit Pierre Toussaint better. He was born into slavery in 1766 on a sugar plantation owned by the wealthy Bérard family in Saint Domingue (today’s Haiti). When a revolution broke out in 1787, the family escaped to New York, where Pierre was apprenticed to a hairdresser. He soon became a coiffeur much sought after by New York society women. Though he could have bought his freedom with his wages, as he did for his wife, sister and other relatives, Pierre chose to stay with (and help support) the Bérard family even after their business had failed. On her deathbed, Madame Bérard finally released him from slavery.

After a fire damaged St. Peter’s Church, where Pierre regularly attended Mass, he helped restore it. (Elizabeth Seton was also a parishioner of St. Peter’s from 1805 to 1808, though we have no record that they ever met or spoke.)

Sisters of Charity honor Toussaint as a major benefactor of the Roman Catholic Orphan Asylum (RCOA) in St. Patrick’s parish, which our Sisters staffed from 1817 on. Not only did he collect money for the orphanage (on behalf of Madame LaRue of the RCOA Ladies Association*) as he trimmed the tresses of wealthy clients, Catholic and non- Catholic alike, Pierre also kept meticulous records of donations received and receipts signed by the asylum’s superior or the Association’s secretary. [*The names and contributions of Livingston, Schuyler and Hamilton women are noted in the Ladies Association’s records of the 1830s.]

The genial Pierre with his niece Euphemia became a frequent and welcome visitor to the orphans and a devoted friend to Sr. Elizabeth Boyle, the Superior, and the sisters who ministered there. Without this man who viewed every person with God’s eyes, there is no doubt that our works of charity in New York would not have survived.

Through a severe yellow fever epidemic Pierre stayed in the city and helped to nurse the sick and dying. He also donated funds to help start the Oblate Sisters of Providence in Baltimore, a community of Black women that began on Paca Street. Because of his many charitable activities, many consider him the father of Catholic Charities in New York. [archny. org/ministries-and-offices/cultural-diversity-apostolate/ black-ministry/venerable-pierre-toussaint]

Pierre Toussaint was heroic in his ability to see the needs of others, regardless of their color, and to invite others to see them as well. He said, “I have never felt I am a slave to any man or woman but I am a servant of the Almighty God who made us all. When one of his children is in need, I am glad to be His slave.” Some today might fault this great-souled, large-hearted man for not confronting the racist society of his time more overtly. But that would be asking of him more than we ask of his white companions, even of Elizabeth Seton. 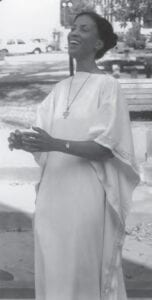 Courtesy of the Franciscan Sisters of Perpetual Adoration, Canton, Miss.

Closer to our own time, Sr. Thea Bowman (1937–1990), the granddaughter of slaves, was educated by the Franciscan Sisters of Perpetual Adoration in Canton, Mississippi. The witness of Catholics who cared for others, especially those in need, inspired her to become a Catholic and eventually to join the congregation which had taught her. She was their only African-American member. Throughout her 52 years of life and in her ministry as an educator, scholar, evangelizer and advocate for justice, she experienced the personal and social effects of racial prejudice. Yet she dedicated herself to sharing the richness of her African-American culture and spirituality.

Sr. Thea became a forthright, joyous force to be reckoned with, an “evangelizer, teacher, writer, and singer sharing the joy of the Gospel and her rich cultural heritage throughout the nation.” [www.sistertheabowman.com/biography] After years in education at all levels, she was appointed to direct the Office of Intercultural Affairs for the Diocese of Jackson, Mississippi, where she worked to fight racial prejudice and foster cultural awareness and sensitivity. The Institute for Black Catholic Studies at Xavier University in New Orleans claims her as a founding faculty member.

In June 1989, already weak from cancer, she addressed a meeting of the U.S. Bishops. From her wheelchair she passionately described what it meant to be African-American and Catholic, how she claimed the Church as her home and kept trying to find her way home. She urged the bishops to promote inclusivity, to bring African- Americans into Church leadership and to support Catholic schools in African-American communities. Then, in her inimitable way, she invited the bishops to stand together and join their crossed arms while she led them in singing We Shall Overcome. Many had tears in their eyes.

One biography described her as “Educator, Missionary Disciple, Advocate for Cultural Awareness and Racial Harmony.” Another stated, “She transcended racism to leave a lasting mark on U.S. Catholic life in the late 20th century.” [www.fspa.org/content/about/sister-thea-bowman] “We all need to be reminded,” wrote a recent commentator, “of Sr. Thea Bowman’s witness and her work—those of us who bear the wounds of racism and those who inflict them.” [www. commonwealmagazine.org/i-bring-myself-my-black-self]

Like Saint Elizabeth Ann Seton, in difficult times we can rely on our faith in a God of love who desires only what is for our good, and in Christ’s promise to remain with us always. Like her, too, we can look to the courage of those who met the challenges of their day and so inspire us to do likewise. As one small step on the road toward racial justice and healing, let us turn to Venerable Pierre Toussaint and Servant of God Sr. Thea Bowman and pray for a share in their prophetic, compassionate, generous and forgiving spirits.