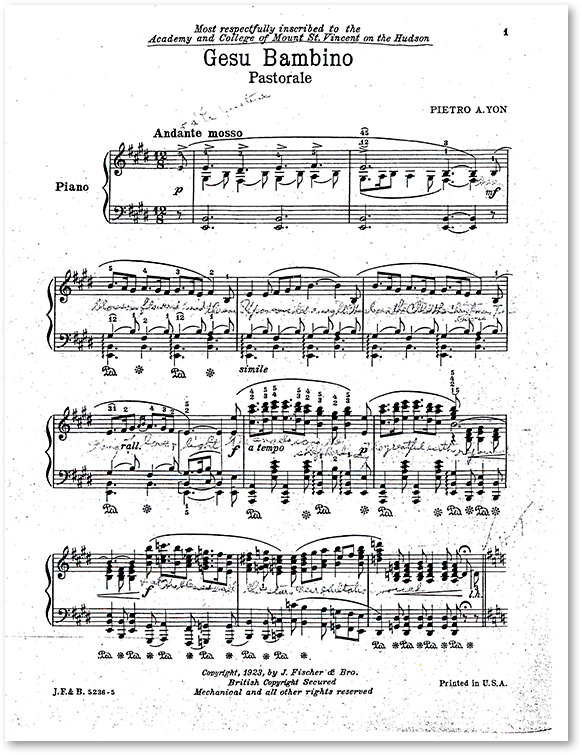 In 2007, alumna Mim Vagt ’50 visited Dr. Charles Flynn to present the College with a copy of the sheet music for the well-known Christmas carol, Gesu Bambino, composed by Pietro Yon in 1917. The 1923 sheet music bears the inscription: “Most respectfully inscribed to the Academy and College of Mount St. Vincent on the Hudson.”  Probably it was a tribute to Pietro’s brother S. Constantino Yon who was for many years director of music at the Mount.

Ms. Vagt noted that it was unusual for a school to have such a famous Christmas carol dedicated to it. It has been recorded by famous artists such as Domingo, Pavarotti, Battle and others.

Originally written in Italian in 1917, Gesu Bambino was translated into English by Frederick H. Martens. It was published in 1923 by J. Fischer & Bro., and first performed at St. Francis Xavier Church in 1924.

The melody and lyrics of the chorus are derived from Adeste Fideles (O Come All Ye Faithful). The music historian Salvatore Basile notes that the song achieved “the near-impossible feat of surviving in the standard holiday repertoire, with important performances, innumerable recordings, and every kind of vocal and instrumental arrangement.”

Born in Italy, Pietro Yon (1886-1943) came to the U.S. at age 21 to become the organist of St. Francis Xavier Church, Manhattan, a position he held until 1926. His brother S. Constantino Yon had preceded him and held a similar position at St. Vincent Ferrer Church, also in Manhattan. In 1926 Pietro became the assistant organist of St. Patrick’s Cathedral, New York. Two years later he was named music director. He was a consultant for both the Cathedral and for Carnegie Hall when they were seeking new organs. Among his pupils was Cole Porter, as well as many noted organists. 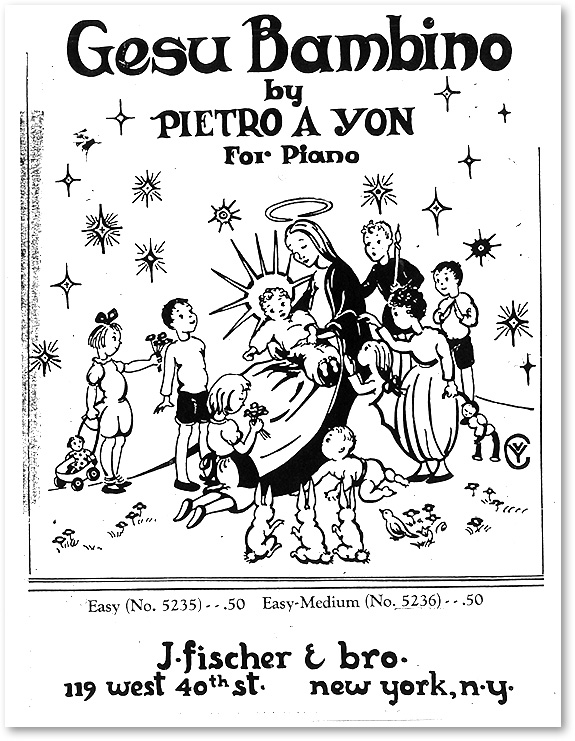 Pietro Yon died in 1943 on the feast of St. Cecilia, patron of musicians, Nov. 22. Among the mourners at his funeral was Toscanini. The Mass of Requieum was Yon’s own composition.

He also composed the Missa Regina Pacis, sung at the Cathedral at a Mass of Thanksgiving on April 18, 1959, that marked the sesquicentennial of Mother Seton’s founding of the Sisters of Charity in America.