It was a warm and muggy Saturday afternoon in New York but a sunny and comfortable day in Guatemala when 39 sisters, associates, and companions from both countries gathered virtually for a retreat focusing on the experiences of being quarantined during the COVID-19 virus. The July 18 event was organized through the leadership of Associate Lisa Shay and a subcommittee of the One Community Work Group (OCWG). Lisa established the group following her Summer 2019 visit to Guatemala and in response to Helen Mack and Luciano Laynez Perez’s request voiced at our Assembly calling for more communication between “New York” and Guatemala.

Before the meeting’s formal opening, all 39 participant introduced themselves. What a gift it was to see so many familiar faces! The gathering also provided a wonderful opportunity to put faces to familiar names. Sr. Virginia Searing and Lisa moderated the day and put everyone’s Zoom skills —muting and unmuting— to the test. 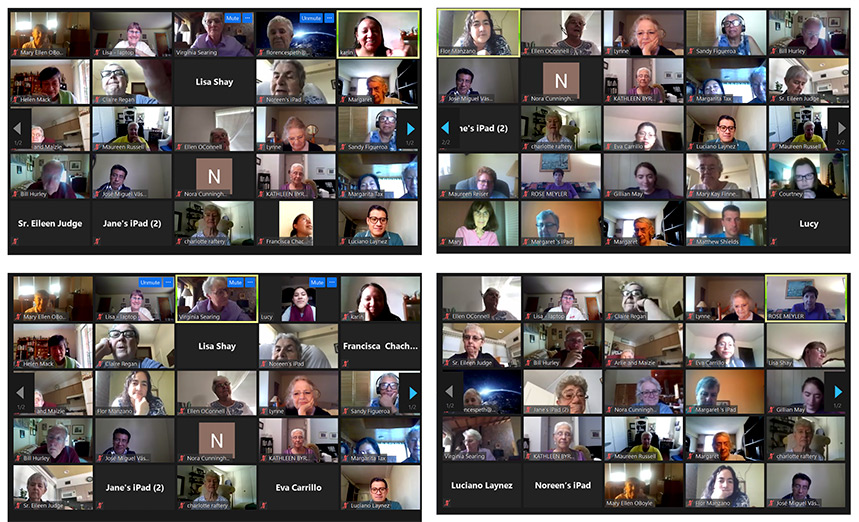 Following an opening prayer led by Associate Bill Hurley, participants were put into breakout sessions to share our experiences, then a spokesperson from each group reported to the whole.

Many discovered commonalities as rich and robust sharing arose. The hardship of losing loved ones and the inability to receive visitors during the past several months was a recurring topic. The group also discussed the hidden blessings that surfaced, such as more time for prayer and contemplation. Guilt about working when others had lost employment, frustration at being denied the ability to volunteer due to being “a certain age” was also a common theme.

The group was a chatty one (Zoom pun intended!). Not only did time run over the two-hour time frame, but participants weren’t able to address the complete agenda in the one session. Sr. Jane Iannucelli, or “Hermana Jane,” led the group in a final prayer.

Maureen Russell, U.S. Coordinator of Associates, reflected on the meeting, saying, “It was wonderful to see so many familiar faces. A significant number from each country had visited the other country — that’s a real plus! I was struck by how much harder the pandemic hit the Guatemalans and how much personal tragedy touched them. We in the States were talking more about the “positives” of our personal “downtime.”

The Holy Spirit was indeed at work, helping to achieve the day’s goal: an opportunity for ALL to come together as ONE.

In light of the successful and energetic meeting, plans for another session are already underway.