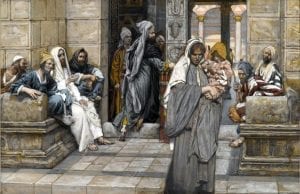 This Sunday’s scriptures draw us to the image of a widow: two faith-filled widows, sacrificing the little they had in order to serve the other. An obvious theme for meditation, then, is “sacrificial giving.” A closer look at the texts, however, suggests that there is more that generous self-giving going on in these stories. Chapter 17 of the first book of Kings opens with the story of the drought during which God provided for Elijah by leading him to a brook and sending ravens to feed him bread and meat twice a day. When the brook dried up, God commanded him to travel to pagan territory; there he would meet a widow who would care for him. No doubt Elijah questioned how this widow, who by definition was a person whose needs were the community’s responsibility, could care for his needs. But he went as charged and both he, the widow, and her son did not go hungry.

The second widow, immortalized through the appellation the “widow and her mite,” presents Jesus with an opportunity to not only praise the generous self-giving of the widow but also to challenge the “love of appearances” and “lack of mercy” on the part of the self-serving religious leadership. So what might God’s word be saying to us today?

Elijah and the first widow are a helpful lens for meditating on the gospel. Elijah’s career as a prophet was in its infancy and being tested and shaped by his responses to God’s lead. He took God’s directives seriously and followed through even when his experience could suggest that he “hedge his bets.” The widow, an unlikely source of sustenance, faced a dilemma: to neglect the needs of her son or to be faithful to the rules of hospitality. They both were faithful to God’s lead.

This faithfulness ought to have been the driving motivation of the religious leaders that Jesus was criticizing. Instead they were preoccupied with the seductive snares of ego rewards. Love of appearance — that is, living on how we look in other people’s eyes — is a concern of the ego: so too, is the inability to see beyond our own desires and appreciate the needs of others.

A clear call from this reading of God’s word is to move beyond the protective walls of our egos and see others and the world as they really are, not as we want them to be in order to serve our needs. The only way this is possible is to give ourselves to the prayer, “My God, lead me to where you want me to be.”

After more than 25 years preparing men and women for ordained and lay ministry in the Church, Sister Jean currently serves as Consultant for Mission at the College of Mount Saint Vincent in Riverdale, NY. She also ministers in adult spirituality and adult faith formation through workshops and spiritual direction.