November 22, 2015—The Solemnity of Our Lord Jesus Christ, King of the Universe 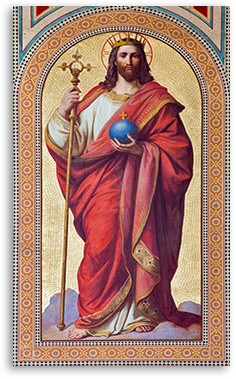 My first New Year’s Eve with the Sisters of Charity was unlike any I had ever experienced. We spent the day in silent retreat! No noisy celebrations for us! It was an opportunity to reflect on the past year and plan for the new one. Today the church is moving towards its own New Year’s Eve. Next Sunday begins a new liturgical year—a new year of encountering Christ in his mysteries. What light might today’s Scripture shine on our end of the year reflections?

Again, as last week, our readings are addressed to people who are struggling to remain faithful to God as their immediate experience says that evil has triumphed. Daniel’s vision that we hear today was preceded by another one in which four beasts, representing the four empires that conquered Israel, are rendered powerless and destroyed. Today’s vision reveals that it is the Son of Man who will supplant the cruel oppressive rule of the former conquerors. For Daniel’s hearers, the one coming on the cloud was the long awaited and desired Messiah. For Christians, the one coming on the cloud is Jesus Christ.

This theme of “conqueror of conquerors” is repeated in the reading from Revelation. The author gives Jesus Christ the title, “ruler of the kings of the earth” in order to challenge the claims of the Roman Empire that its people owe their loyalty and even their worship to the Roman emperor. An additional title given to Jesus Christ is the “faithful witness,” calling attention to the fact that as we come to know him, we come to know God’s character; he is the human face of God! If these two readings were our only sources shaping our ideas of the “conqueror of conquerors,” we would be anticipating someone far different from Jesus.

In today’s gospel, Pilate’s interrogation of Jesus provides the opportunity for Jesus to reveal that his kingdom is of a different order than human kingdoms. By corollary, his manner of being king is different from human kings. Throughout the Hebrew Scriptures, kings are assessed and found wanting in obedience to God and genuine service to the people in their care. It is a question of how one uses the power and authority of one’s position. It is through compassionate service that God’s kingdom or God’s reign is made present.

Ninety years ago, Pope Pius XI, writing in the aftermath of World War I, noted that while there had been a cessation of hostilities, there was no true peace. He held that true peace can only be found under the Kingship of Christ as “Prince of Peace.” Ninety years later we still yearn for the Prince of Peace!

Through our baptism we have been made a member of Christ who is Priest, Prophet and King. As this liturgical year closes, let us take time to reflect how we have lived out Christ’s kingly mission. For the ways we have served with compassion, we pray “Yes, thank you.” For the ways we have failed to attend to our sisters and brothers in need, we pray, “Lord, have mercy. Open our eyes and hearts in this new year.”

After more than 25 years preparing men and women for ordained and lay ministry in the Church, Sister Jean currently serves as Consultant for Mission at the College of Mount Saint Vincent in Riverdale, NY. She also ministers in adult spirituality and adult faith formation through workshops and spiritual direction.