November 20, 2016 — Solemnity of Our Lord Jesus Christ, King of the Universe

Proclaim with full voice: “To Jesus Christ our sovereign King! Crown him with many crowns! King Jesus rides on a milk-white horse; ride on, King Jesus!” Respond to the challenging taunt to him: “So then, you are a king?”

Our notions of ‘king’ or other royal designations are based on memories and imaginings of other times and cultures. Our experience does not include that of the biblical tradition in which the King reigned as protector of his people. A Shepherd-King guided and guarded his whole kingdom. Safety and security, prosperity and peace were his gifts and responsibilities.

When proclaimed by Pope Pius IX in 1925 for the Roman Catholic Church, today’s feast was at the end of October before the feast of All Saints. The intent was to stand up to growing secularism. In 1970 the feast was moved to the final Sunday of the church year. As other churches [Anglican, Lutheran, some Orthodox, some Protestant] began to use the same cycle of Scriptural readings, the feast became more commonly celebrated to close the year.

To declare that Jesus the Christ, the Messiah, the Anointed One, is King of the universe proclaims his sovereignty, his rule-over-all. The notion of the Cosmic Christ may be useful to accommodate our deepening sense of natural science and to infuse it with new hopefulness. Indeed we are made of ‘stardust.’ Or as Max Ehrmann said in “Desiderata” decades ago, “No doubt the universe is unfolding as it should.”

The image of Christ as Ruler-over-all, Pantocrator, appears in a marvelous mosaic in the Hagia Sophia in Istanbul. The original site was the church built by Constantine. Successively rebuilt, the magnificent wonder-of- the- world church of Holy Wisdom became a cathedral, basilica, then a mosque until Ataturk secularized Turkey. Hagia Sophia is now a museum. The mosaic of Christ, Ruler-Over-All, has been there since 1261. Holy Wisdom shelters this image.

The mosaic carries a majestic presence, an awesome calm, a reverential quiet that may evoke prayer. Ancient images and names both reveal and hide the mystery of who this King Jesus is. Nailed to the cross was the accusation and proclamation in three languages: “King of the Jews.”

How can we translate such imagery to the Risen Jesus whose victory on Calvary birthed a new creation? A soldier’s lance pierced his heart; blood and water burst forth like the signs of a new birth. “He is the image of the invisible God, the firstborn of all creation.” What new understanding arises in our minds and hearts when we consider and contemplate our relationship to Jesus? To be Elder Brother as firstborn, to be Savior as his name implies, to be Lord of all creation, to be the Holy One enfleshed in the woman’s womb, to be Friend to me? How can this be so? An enemy of the powerful? Or one of their own? The great and holy “I Am,” Lord of all, King Jesus Christ. HALLELUJAH!

For your reflection: As the Year of Mercy closes, can the compassion and forgiveness of Christ our King evoke confidence and courage in my heart, in my very bones? 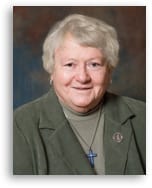 Sr. Eileen is a teacher who served in New York and the Bahamas, where she also served as a parish administrator. She gives occasional presentations in senior adult enrichment settings.