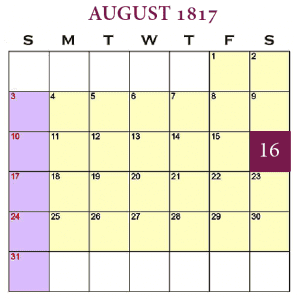 Sister Rose White had to say good-bye to the Sisters she had been on mission with for three years in Philadelphia, and to the orphans she had come to know and love. Sisters Cecilia and Felicity were given a lesson in how to respond in fidelity to the cost of the “yes” they had all said when they pronounced their vow of obedience years before.

The sisters traveled from Philadelphia through New Jersey, known to all today as “the Garden State.” It was high summer still, and they passed by many of the farms and gardens for which New Jersey is still famous. They were used to the simple fare of home-grown fruits and vegetables of their farm in Emmitsburg. In a few months, their diet would consist of soup, potatoes, and carrot coffee because they saved the good produce, bread, and meat to nourish the children for whom they would lovingly care.

And they were interested in planting in the children fruit of a different sort as well: love of God and neighbor, joy, kindness, and courage in the face of difficulties. We look back in wonder and gratitude at how well they succeeded.

Recall the seeds you have planted over the course of your life. Reflect on your accomplishments and see in them the hand of God.

“God has given me a great deal to do, and I have always—and I hope always—to prefer His will to every wish of my own.”