The following is from the Spring 2021 issue of VISION. 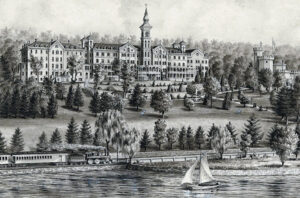 Academy of Mount Saint Vincent-on-the-Hudson illustration, southbound train with the Academy and castle in background; ca. 1880

During the summer months on the Mount Saint Vincent Campus, access is permitted to St. Vincent’s Point, a secluded, grassy area at the edge of the Hudson River. To reach St. Vincent’s Point, pedestrians use a footbridge over the railroad tracks to enjoy views of the majestic Palisades, George Washington Bridge and, directly south, the western skyline of Manhattan. Although the building no longer exists, the Mount Saint Vincent train station on the Hudson Line stood on the west side of the railroad tracks for over one century.

When Edwin Forrest, renowned Shakespearean actor, purchased the 55-acre Riverdale estate in 1847 that later became Mount Saint Vincent, he was unaware that the railroad along the Hudson River would soon be built. It was Thomas C. Cornell, a civil engineer and Forrests’ neighbor to the north, who persuaded the actor to sell 1.5 acres of riverfront property to the New York Central and Hudson River Railroad Company. (1) Although Forrest originally intended to build his castle home by the river, he instead chose a site eastward on the hill. Mr. Cornell was instrumental in the negotiation when the Sisters of Charity purchased the estate from Edwin Forrest in 1856.

After the Academy of Mount Saint Vincent relocated from McGown’s Pass in Manhattan to Riverdale in 1857, the railroad station’s direct proximity to the campus served to increase enrollment at the private girls’ school. An announcement in the Freeman’s Journal of July 1859 noted: “Visitors can reach the Academy… by the river, steamers, touching at Yonkers, by the Hudson River [railroad] cars, which will stop on the grounds, or by private conveyance on the turn-pike.” 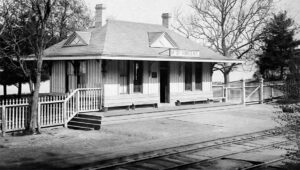 The riverfront area was described in A Descriptive and Historical Sketch of the Academy of Mount St. Vincent on-the-Hudson, New York City, 1847–1884, “…picturesquely situated on the southern point of a small headland, running out opposite the castle and extending northward from the landing are large bath-houses for the convenience of the pupils; the water being quite brackish, many of the advantages of regular sea-bathing resorts are enjoyed here. The little cape, covered with trees, is separated from the Academy lawn by the track of the Hudson River Railroad. Over the cut of the railroad, which is thirty feet in depth, is thrown a strong foot and carriage bridge, thus connecting the beach with the grounds.” The railroad frontage on the Campus would have allowed the sisters and the students at the Academy to view the funeral train carrying Abraham Lincoln back to Springfield, Ill., as it passed by the campus on April 25, 1865.

A mutual understanding between the rail company and College administration to remove the station was reached to increase security by limiting access to the campus from the rail line. The Mount Saint Vincent railroad station was closed by Metro North on June 3, 1974, when usage fell to less than 50 passengers daily. (2) Subsequently, the Sisters of Charity granted permission to the College to occupy and use the land area to construct docks and/or bulkheads along the river as well as provide facilities for educational purposes. Today the area can be seen from the river by boat, or while traveling by rail.