by Director of Communications | May 11, 2019 | NEWS, Reflections, Spirituality | 1 comment 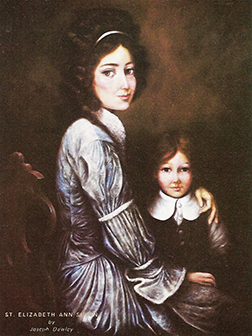 Saint Elizabeth Ann Seton was no ordinary woman. Her love of God, her commitment to the Church, and her desire to follow God’s will, whatever the cost, were all extraordinary. Yet, at the same time, her letters reveal that as a mother, she still experienced the most ordinary joys and the most ordinary struggles.

In just eight years’ time, Elizabeth brought five children into the world: two boys (Richard and William) and three girls (Anna Maria, Catherine, and Rebecca). She adored them all. “The darlings are too precious, too lovely, and their mother too happy,” she wrote in a letter to one friend. She never attempted to hide her affection either. “Mamma longs to kiss you and hold you in her arms,” she wrote to five-year-old Richard upon her departure for Italy.

At the same time, Elizabeth wasn’t immune to the daily trials of mothering. “My companions talk so fast, they confuse my brain,” she confided in one letter. She also fretted about her “saucy boys” who “almost master me” and anxiously sought advice from a friend about Anna Maria’s stubborn will and bad temper, declaring that her daughter “despite all my endeavors is past my management.”

As the years passed, however, nothing concerned Elizabeth so much as her children’s relationship with God and the state of their souls. During the months leading up to her conversion to Catholicism, what concerned her most was the children. “I must answer for my children in judgment, whatever faith I lead them to,” she explained. After her conversion, she delighted in her three daughters ready acceptance of the faith, but feared for her sons, whose friends mocked the Church. In order to protect them from bad influences, she sent them off to one of the only two Catholic boarding schools for boys in the United States at the time: Georgetown University.

For as much as Elizabeth wanted to safely shepherd her children into heaven, though, she also recognized, as they grew, that they had their own path to walk, and that all the blows life dealt them were a necessary part of that journey. “May they fight it out as their Mother did before them, looking to Providence and beyond the grave…Well, I hope they will be punished by disappointments and adversity till they do.”

For mothers and fathers today, seeking to raise faithful children in a faithless world, Elizabeth is both a model to follow and a spiritual mother to whom we can turn. Her affection, her gentleness, her desire to provide for her children, and help them grow in holiness is what God asks of every parent. Likewise, her prayers—for us, our children, grandchildren, and spiritual children—is what Elizabeth offers us. We are her children, too, and the words she wrote to her son Richard, she also says to us: “Be blessed with the full blessing of a mother’s heart, think how it dotes on you, and how I have held you in these heavenly feasts.”

In the Words of Mother Seton

“I will tell you in what I know American parents to be most difficult—in hearing the faults of their children. In twenty instances where you see the faults, they are not to be immediately corrected by the parents, but rather by good advices and education. It is best not to speak of them to Papa and Mamma, who feel as if you reflected on their very selves. While to you [teachers and caretakers] the parents will say, “Yes, Sir, I know, I perceive,” in the heart they think it is not so much; and they will soften and excuse to the child, what they condemn to us. Our efforts afterwards avail very little-so that is a big point.”  — Elizabeth Seton to Simon Gabriel Bruté, January 1816