Sister Theresa was an excellent and enthusiastic educator who will long be remembered by her students and their parents. 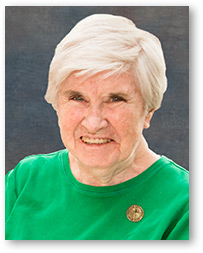 Sister Mary Theresa Fowler (Sister Mary Charles) was born April 2, 1931 in Manhattan, one of seven children of Jeremiah and Julia O’Byrne Fowler. Mary Theresa attended Ascension School and Cathedral HS before entering the Sisters of Charity of New York on September 8, 1949. Sister Mary Charles earned a BA in Latin from the College of Mount Saint Vincent and an MS in Elementary Education from Hunter College, Manhattan. She later earned NYS permanent certification as teacher and administrator in the elementary school.

Sister Charles began her ministry in elementary education at Saint Agatha Home, Nanuet, where she taught grades 4 through 8. She then taught at Saint Emeric and Incarnation, in Manhattan. From 1967 until 1971, Sister was Principal at Saint John the Baptist in Brooklyn. The following year she was Coordinator of Elementary Education for the Sisters of Charity, then worked for one year as a guidance counselor at Bishop McDonnell HS in Brooklyn. Sister Theresa joined the faculty of the Dalton School in Manhattan where she taught middle school English until 1994. After her retirement from education she moved to Flushing, Queens, where she lived until moving to the Convent of Mary the Queen. In 2015, she was among a group of sisters who moved to Schervier Nursing Care Center in Riverdale where she continued her ministry of prayer, service and witness.

Sister Theresa was an excellent and enthusiastic educator who will long be remembered by her students and their parents. She was compassionate, creative and had a great sense of humor. Sister Theresa loved to travel as well as cook special holiday meals that she enjoyed with friends and neighbors. We rejoice with her now as she is warmly welcomed by our loving God, her family and friends and the Sisters of Charity who have gone before her. Be at peace, Sister Theresa.