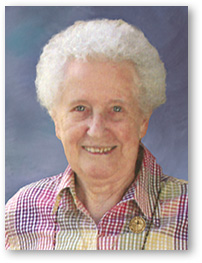 Sister Marion Halpin (Sister Marie James) was born January 28, 1917 in Scranton, PA. She was the only daughter of Edward and Mary McNiff Halpin and had one brother, Edward Joseph. Marion attended elementary school in Scranton and Our Lady of Victory Academy in Locke, NY. She entered the Sisters of Charity of New York on September 8, 1935, but returned home in 1936 due to the death of her father; she re-entered on February 1, 1941. Sister Marion received a BS in Business from the College of Mount Saint Vincent and later earned an MED in Social Gerontology from Columbia University.

Sister Marion’s first ministry was in elementary education. She taught in Saint Agnes School and Saint Patrick School, both in Manhattan, and Saint Barnabas School and Saints Peter and Paul School, both in the Bronx. She worked in the Accounting Office at the New York Foundling Hospital for several years and then at the College of Mount Saint Vincent in the Student Aid Program. From 1970 until 1972 Sister Marion studied full time at Columbia University where she earned her degree in Social Gerontology. For the next ten years she ministered as a geriatric social worker for Catholic Charities in New York City. Sister Marion moved to Pawling, NY, where she continued to help seniors and others through parish ministry and counseling. In 2002 she retired to Mount Saint Vincent Convent where she spent nine happy years before moving to the Convent of Mary the Queen. In the summer of 2014, Sister Marion was among the first group of sisters to move to the Assisted Living Program of the Jewish Home Lifecare in the Bronx. In 2015, she moved to Cabrini Nursing Center of Westchester in Dobbs Ferry.

Known for her keen wit and deep thought, Sister Marion was an avid reader of National Catholic Reporter and The New York Times. She enjoyed working with the children whom she taught and the senior citizens whom she counseled and assisted in understanding their medical needs. She was a strong advocate for the seniors and made sure they were well versed in their rights. Sister Marion was very close to her brother throughout his life, as well as to her niece, Eleonore, her grandnieces Kathy and Robin, her grandnephews Stephen and Christopher, and their families. Visits from her extended family, who lived at a distance, always brightened her day.

We rejoice with her now as she is welcomed home by our loving God whom she served so well for seventy-six years as a Sister of Charity. Be at peace, Sister Marion.