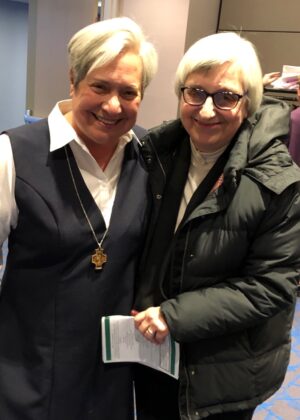 Migrants who arrive at our Southern border seeking refuge from their desperate living conditions have faced hardships they never imagined. Ephesians 5:1–2 tells us, “Therefore be imitators of God, as beloved children. And walk in love.” In Sister Norma Pimentel, a member of the Missionaries of Jesus and a licensed professional counselor, our sisters and brothers who arrive from Central America find a faithful imitator of God who surely “walks in love.”

On the evening of February 19, 2020, Manhattan College invited Sister Norma to share her experience of working with migrants at our Southern border. The evening was part of Manhattan College’s annual Peace Week. Representing the Sisters of Charity at this event were Sisters Carol De Angelo, Florence Speth, Kathleen Byrnes, and Mary Sugrue, and Associates Miriam Ford, Jack Marth, and Bill Hurley.

As executive director of Catholic Charities of the Rio Grande Valley, Sister Norma oversees the charitable arm of the Diocese of Brownsville, Texas, providing oversight of ministries and programs in the areas of emergency and housing assistance, counseling and pregnancy care to four counties. She also chairs the local emergency food and shelter program that distributes federal funds to local agencies that assist the area’s needy. In response to the surge of Central Americans seeking asylum in the United States, she set up Humanitarian Respite Centers in McAllen and Brownsville, Texas, in June 2014. 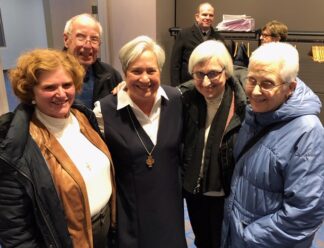 Sister Norma emphatically stressed the need to pray and vote so that the migrants suffering on our border with Mexico will find quick relief to their quest for asylum. Presently, thousands of migrants from Central America are living in tent cities where subfreezing temperatures are causing sickness and suffering. Those waiting include many pregnant women and children. Some are assigned court appearances as far away as 2021. Sister Norma shared the fact that most requests are denied, and those that are granted are often overruled by ICE. Often the decision is based on which judge is conducting the hearings. Those denied asylum are forced to return across the border. Fear of retribution for fleeing causes them to remain in the tent cities.

A story that resonated with Sister Carol De Angelo was Sister Norma’s recounting of a time when she prayed with children in detention. An officer later approached her and said, “Thank you. Your praying with them makes us see them as human.” Sister Carol added, “Sister Norma reminded us of the power of prayer and of the Eucharist (which sustain her) and the need to advocate for just policies. ‘We need to hold legislators accountable and govern with the principles that we stand for.’”

In recognition of her work, Sister Norma received the 2015 Martin Luther King Jr. Keep the Dream Alive Award from Catholic Charities USA. She has met with Pope Francis and spoken at the U.N. headquarters in New York City. Our Sunday Visitor named Sister Norma as one of eight Catholics of the Year.

In reflecting on the moving presentation, Associate Bill Hurley said, “Listening to Sister Norma left me with a sense that those suffering at the border are at least receiving some compassion. I also am thankful for Catholic Charities who do so much throughout America for migrants.”