Sister Mary Adele saw needs and did what she could to assist them. Over 40 years ago, a guidance counselor in elementary school was rare. 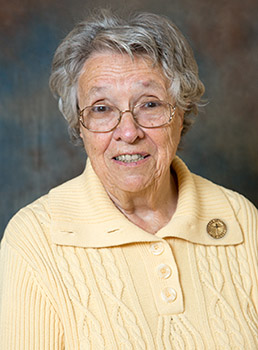 Sister Mary Adele Henze, formerly Sister Marie Raymond, was born November 4, 1930, in the Bronx, New York. She was one of five children, four daughters and one son, of Raymond and Mary Murphy Henze. Mary Adele attended grades 1-7 at the Academy of Mount Saint Vincent. When it moved to Tuxedo Park, she entered grade 8 at Saint Barnabas in the Bronx and continued into the High School. After graduation, she attended the College of Mount Saint Vincent before entering the Sisters of Charity of New York on September 8, 1951. Mary Adele’s aunt, Sister Catherine Murphy, had entered the Sisters of Charity 15 years earlier. Sister Marie Raymond received a BA in History from the College of Mount Saint Vincent, an MA in Education from Manhattan College, and an MA in Religious Studies from the Catechetical Institute of the Archdiocese of New York. She earned New York State Permanent Certification for teaching Social Studies in Grades 1-8 and for High School Counseling.

Sister Mary Adele’s 51 years of active ministry were dedicated to education. The first 17 years were on the elementary school level as teacher at Saint Paul in Brooklyn, Saint Ignatius Loyola in Manhattan, Saint John the Evangelist in White Plains, and as Principal at Holy Trinity in Mamaroneck. For 18 years, she was a guidance counselor for elementary grades at Nativity, Visitation, Saint Gabriel, and Saint Barnabas in the Bronx, and for Saint Gabriel High School in New Rochelle. For the next 16 years, Sister Mary Adele directed the Religious Education Program at Immaculate Heart of Mary Church in Scarsdale.

Sister Mary Adele saw needs and did what she could to assist them. Over 40 years ago, a guidance counselor in elementary school was rare. She saw the support she could provide to teachers and to students through classroom instruction, teacher-parent conferences, and counseling students in their individual concerns. Her response to needs continued into her retirement years. She volunteered at the New Rochelle Outreach Center to teach English to newly arrived immigrants. At Mount Saint Vincent Convent, sisters appreciated her offers to drive them to a store or an appointment. Knowing the adjustment needed after moving into a retirement facility, she made the transition easier for others. Her presence and ability to make people laugh enhanced the community shared among the sisters.

Sister Mary Adele was in her 72nd year of commitment as a Sister of Charity of New York when she died at Calvary Hospital on July 17, 2022.

“Fear not, for I am with you; I have called you by name, you are mine.” Sister Mary Adele, you chose these words of the prophet Isaiah for a special jubilee year celebration. A loving God now speaks your name to bring you home. Go in the direction of that call and be at peace; you have nothing to fear.