Sr. Marie Paula both wise and intelligent spent her life bringing others to the love of learning. 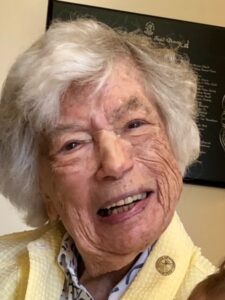 Sister Marie Paula Holdman, Mary Elizabeth, was born November 6, 1920, in Astoria, New York, one of three daughters of Ernest and Margaret Felleman Holdman. Mary Elizabeth attended Immaculate Heart of Mary School, Scarsdale, Eastchester High School and the College of New Rochelle, earning a BA in English, before entering the Sisters of Charity of New York on September 8, 1942. Sister Paula later earned an MA in English from Catholic University of America in Washington D.C., an MA in German from Middlebury College Graduate School in Vermont and a PhD in German Language and Literature from the Graduate Center of City University of New York in 1976.

For a period of more than ten years, Sister Paula held the position of Director of Communications and Editor for various publications of the Congregation: the newsletter, Le Gras Bulletin; the original news magazine which evolved into the present-day VISION; a pictorial Image Book of the sisters in the Congregation; and Tributes, biographies of our deceased sisters. At the same time, Sister Paula participated in a History Writing Project promoted by Loyola University, Chicago, Saint Benedict College, Wisconsin, and Mount Saint Mary College, Newburgh, NY. She traveled to several states presenting papers, some later published, on the role of women religious and the Sisters of Charity in fulfilling the Catholic mission through the advance of higher education. In these efforts, she particularly noted the College of Mount Saint Vincent “. . . as a spiritual as well as intellectual center in rapidly changing times in education.” Sister Paula retired in 2007 and continued in volunteer services at the College. She died September 18, 2022, at Cabrini of Westchester in Dobbs Ferry, in the eighty-first year of commitment as a Sister of Charity of New York.

Sister Paula was an avid reader, never ceasing to develop her interests. She maintained a keen attention to the growth of the College of Mount Saint Vincent and to initiatives of the Congregation in carrying out its mission. As a teacher, she endeavored to convey a love of learning beyond the text and the classroom for the enrichment of the human spirit.

Sister Paula, we celebrate your life well-lived in the hope of the resurrected Jesus who promised to prepare an eternal home for us. Here you will be greeted by family and friends to live forever in God’s mercy and love. Peace be with you!