Saint Elizabeth Ann Seton, foundress of the Sisters of Charity, always urged her sisters to remain faithful and push on—even if uncertainty lay ahead.

Despite the danger, keep going.

And that’s precisely what Mount alum Todd Gable ’15 is helping the ordinary citizens of Ukraine to do—have the resources needed to continue defending their homes and families. Despite the danger, fear, and heartbreak, they keep fighting.

If you’re wondering where Todd got the passion for helping the people of Ukraine, he served for four years as a Peace Corps Volunteer in the country—living and working there from March 2016 to March 2020—in the cities of Zalishchyky and Kyiv. He was only forced to leave the country as part of the global Peace Corps evacuation due to the start of the COVID-19 pandemic.

“While in Ukraine, I met and married my wife, Olesya Korpan,” added Todd. “Olesya’s family has remained in Ukraine throughout the war, so the developments from overseas have left a huge impact on us.”

On the frontlines, citizens need access to medical supplies in case of injury or emergency. Time is the enemy when it comes to many wounds, so immediate first aid can make all the difference in saving a life. A simple bandage can prevent someone bleeding out before arriving at a hospital.

The issue? There are little to no IFAKs left on the European continent.

In the middle of a Wednesday night three weeks ago, Todd received a call from his Peace Corps Counterpart, Iryna Luchyn. Iryna still lives and works in Ukraine along with her husband and two young sons.

She startled Todd awake, asking if she could transfer to him $4,000 that she raised to purchase and assemble IFAKs here in the U.S., then ship them to Ukraine.

“Of course, I agreed. But my first question was—what’s an IFAK?!”

He bought supplies off Amazon, laid out all the materials in his apartment, and assembled and packed the kits with Olesya.

Itching to do more, Todd posted his personal PayPal account on his Facebook page—encouraging his friends to donate money to purchase more IFAKs. Within in three days, he raised over $15,000—a number far greater than he ever anticipated.

That’s when he was connected with the RPCV Alliance for Ukraine. Comprised of returned Peace Corps Volunteers, the organization is a 501(c)(3) non-profit quickly mobilizing to provide assistance to Ukraine. In just about three weeks, the RPCV Alliance for Ukraine raised over $90,000 to purchase IFAKs for Ukrainian defenders—and Todd is helping get the supplies packaged and distributed to brigades across the country.

But with that being said, Todd needed to expand the IFAK assembly process outside of his living room.

An alum of Mount Saint Vincent and an Associate of the Sisters of Charity, Todd reached out to both the College and the Congregation to see if anyone would be willing to help assemble the IFAKs. In the spirit of Saints Vincent de Paul and Elizabeth Ann Seton, there was mutual consent that help could certainly be offered.

“Sisters, Associates, campus employees, and students worked tirelessly last week from Wednesday morning to Thursday afternoon to assemble over 500 IFAKs—saying a prayer before each one was packed away for shipment,” said Todd. In addition to the sisters at SC Center, other sisters arrived from Mount Saint Vincent Convent, Ely Hall and other residences to help in the effort.

Friday evening, 26 bags of IFAKs and other medical supplies were picked up by volunteer Jordan Friede and brought to JFK airport, where Todd’s wife Olesya accompanied them on a commercial flight to Warsaw, Poland.

“By opting to fly with them commercially, instead of sending them with a humanitarian aid shipment, it would guarantee that IFAKs would be in the hands of the people of Ukraine only a day or two later—instead of waiting weeks,” Todd explained. “In this time of war, every day counts.”

Once Olesya and the supplies arrived in Warsaw, a female driver picked them up (since only females can cross the border into Ukraine) and drove them to Kiev. From there, they would be delivered by an additional volunteer, Lesyk Yakymchuk, to brigades throughout the nation.

Over 1,000 IFAKs have already been transported to Ukraine, with an additional 600 anticipated to be assembled and sent by the end of this week with the help of more volunteers from campus.

Todd is playing just a small role in the Ukrainian defense, and he encourages everyone to support the RPCV Alliance for Ukraine and their mission.

“The RPCV Alliance for Ukraine would not be able to continue this project without its generous donors and faithful volunteers,” remarked Todd. “It’s important that we keep spreading the word of the good work the organization is doing, and I’m proud of the ways the College and the Sisters have come together to support the cause.”

Want to learn more about the RPCV Alliance for Ukraine or support their work? Find out more information here. 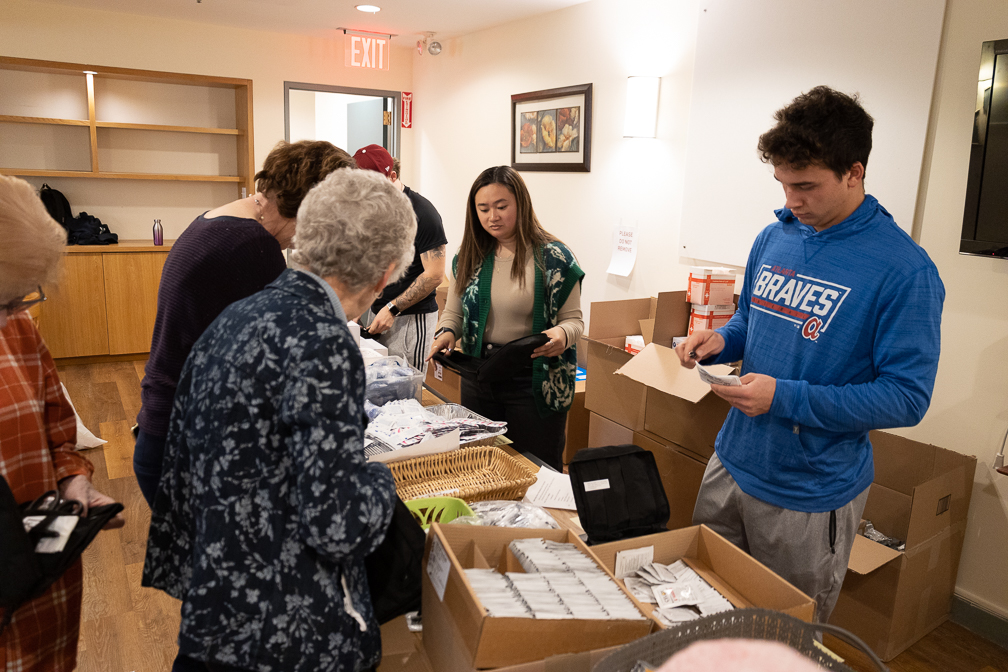 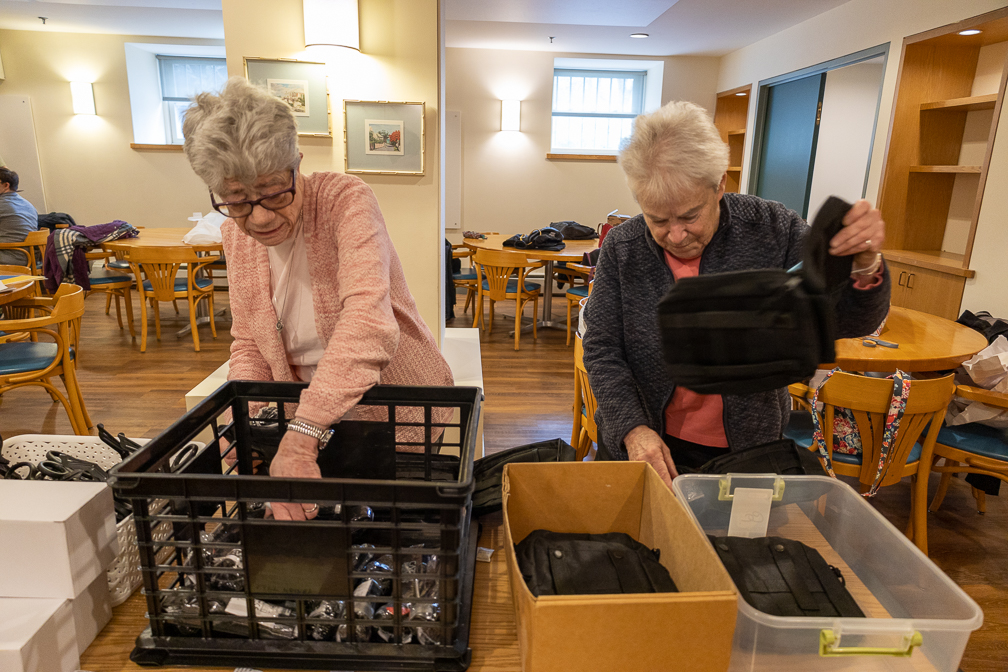 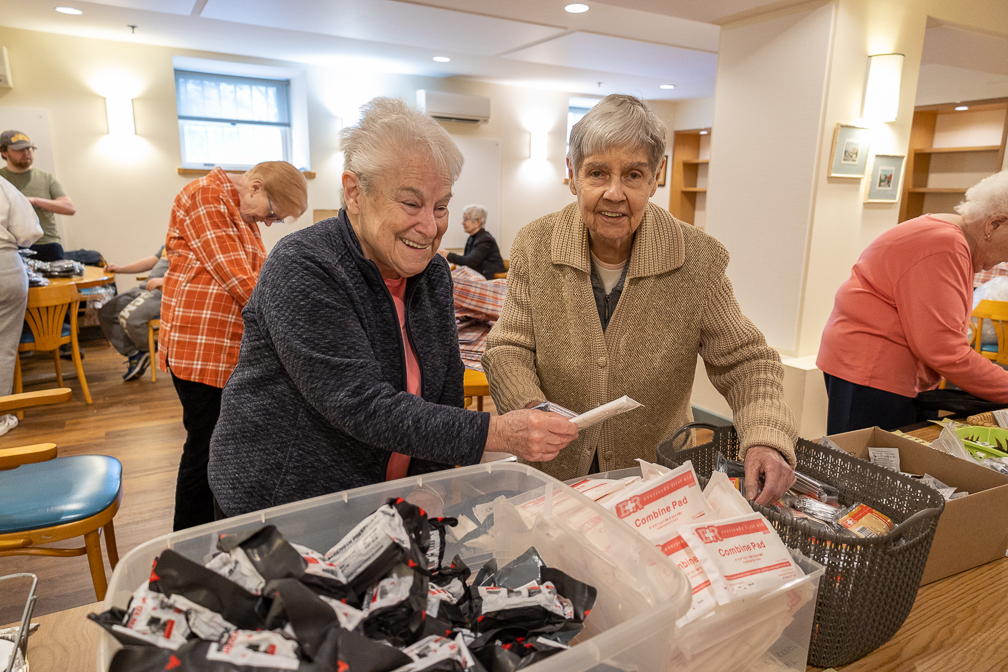 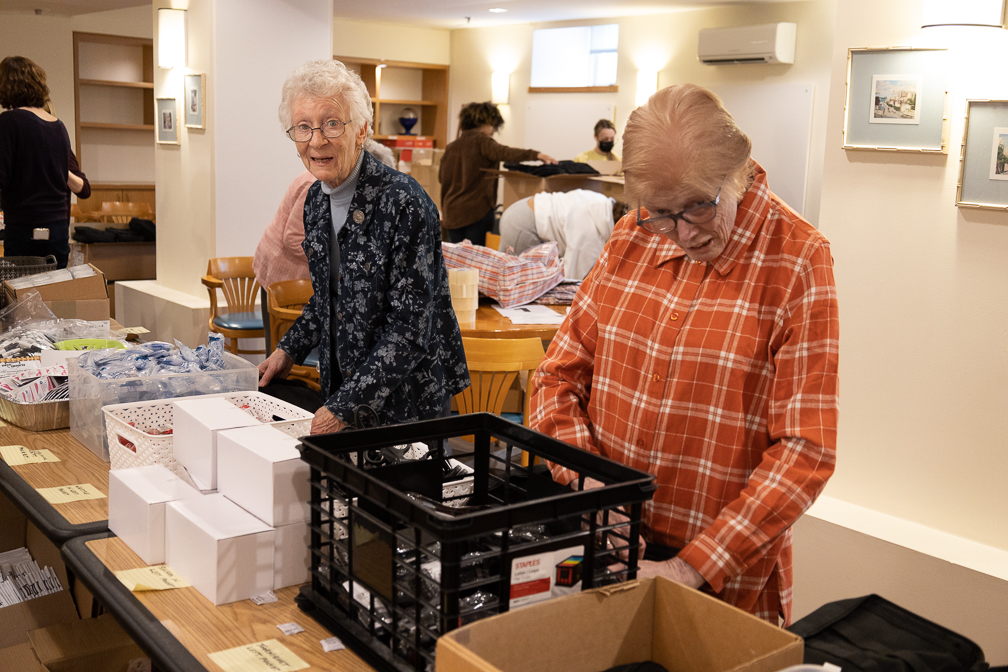 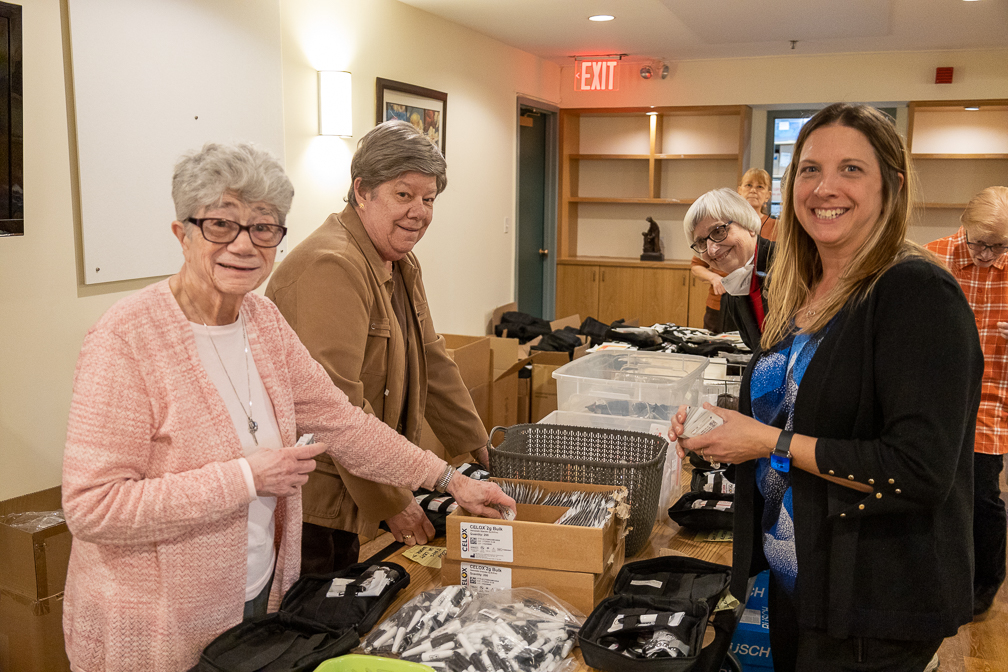 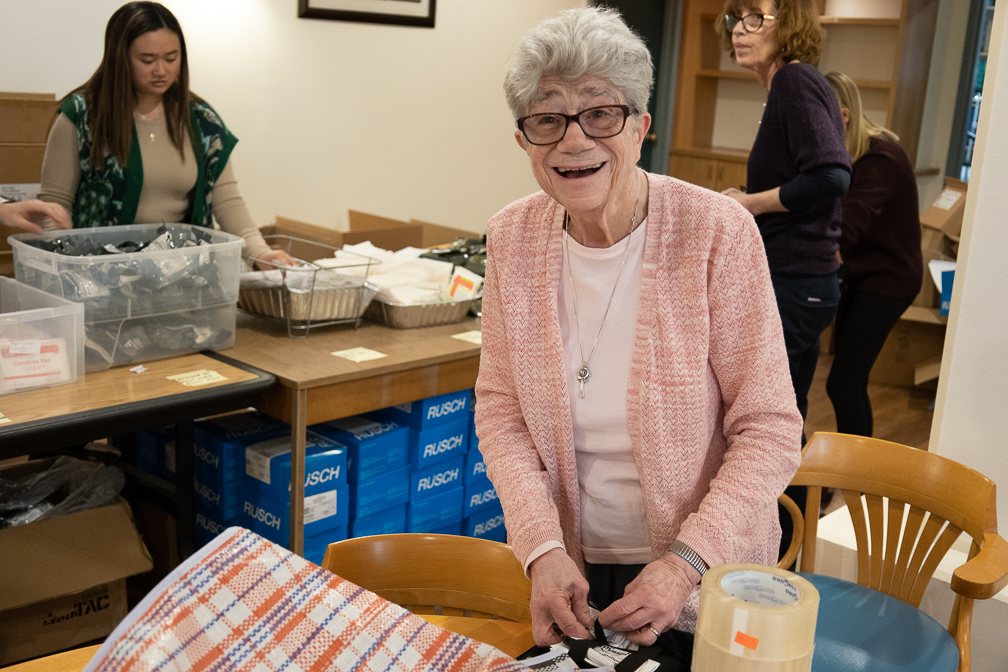 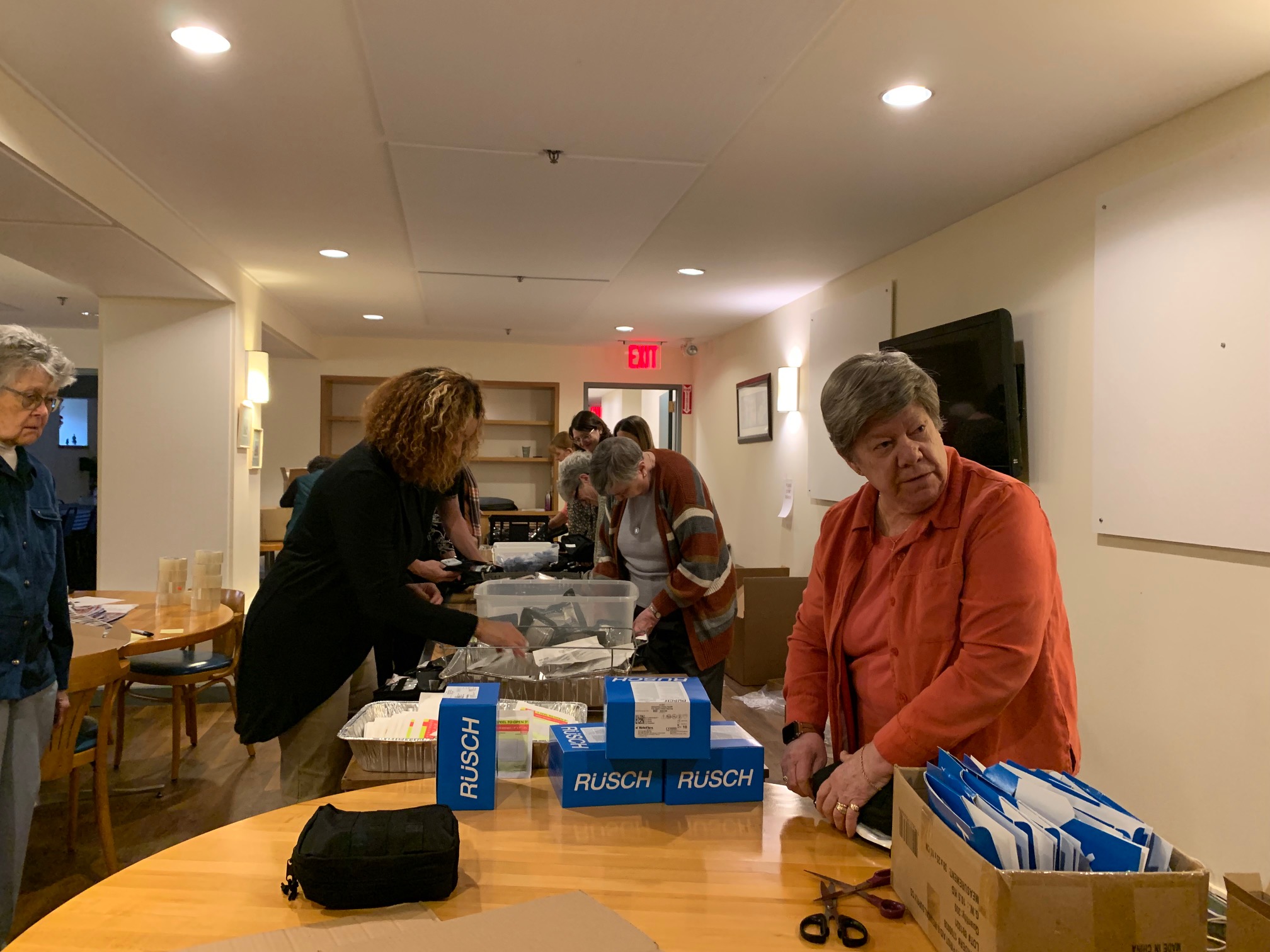 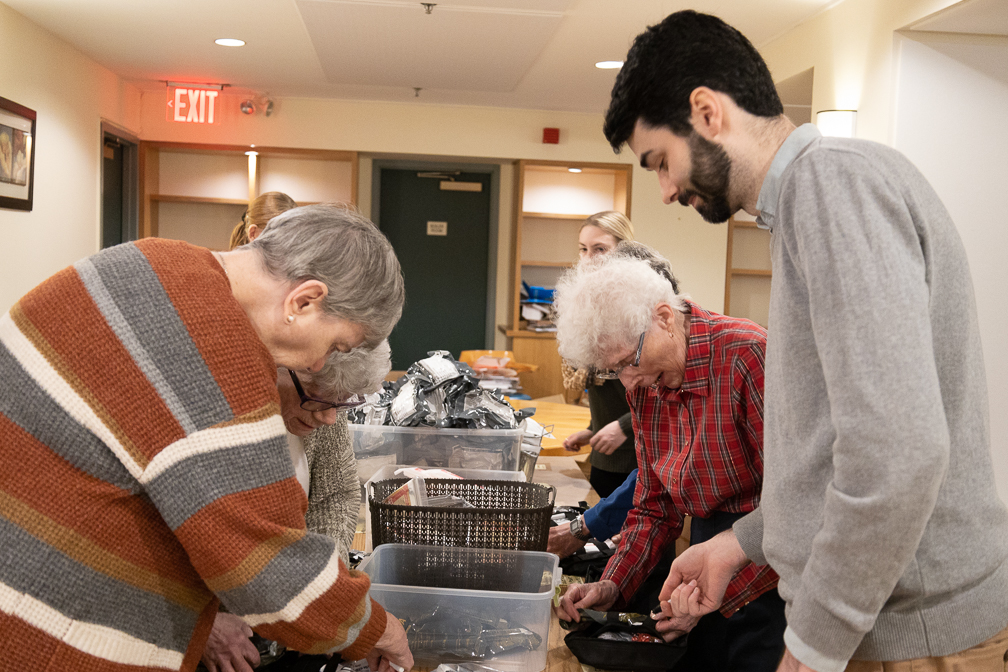 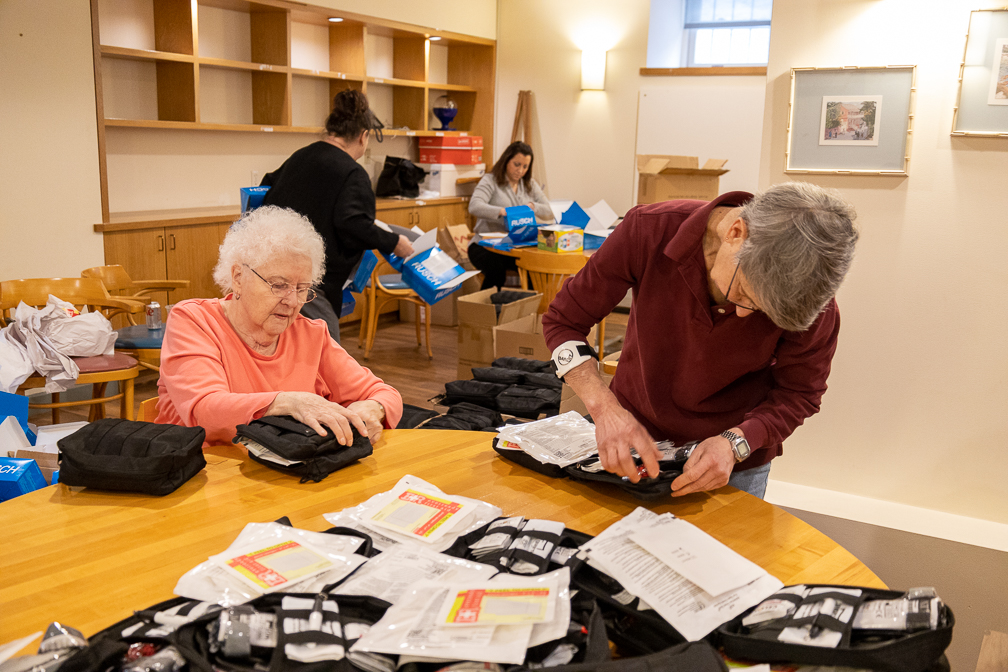 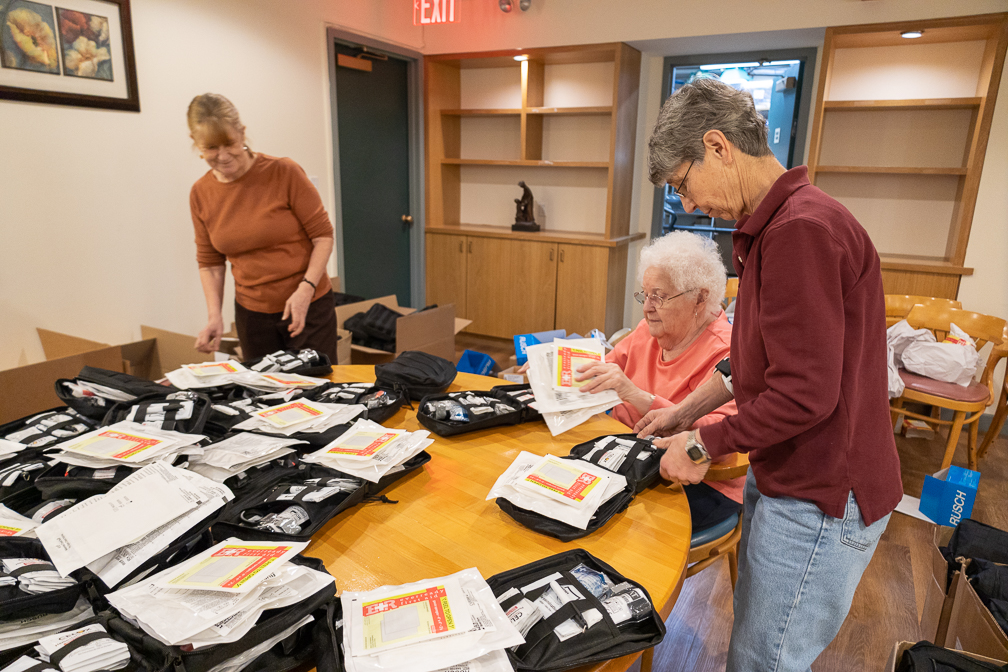