In the end there is only the son and his mother. They inhabit a country all their own, an island of peace amidst a sea of confusion and violence. Death is happening in this moment, but Life will mysteriously, and forever, triumph. 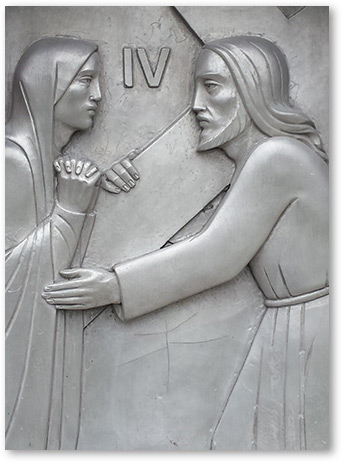 Let us approach with reverence and awe the scene that John’s passion narrative sets before us.

And let our gaze be on Mary, the mother, standing beneath the cross of her son’s indignity and suffering.

Be with her. Feel the power of her silent presence — be in the presence, for it is a holy place.

She could not know when she placed her infant child in Simeon’s arms and heard his prophecy that what would be demanded of her was the death of her son.

Children should not die before those who have given them life.

Mothers should not have to watch in silent agony as their children die before their time, nailed to crosses of poverty and starvation, injustice and oppression, with their hopes and dreams for them forever shattered.

Yet the mothers of Syria and South Sudan, of Iraq and Afghanistan, of Guatemala and Haiti and Mexico, must today stand and watch, like Mary, weeping for their children who are forever lost to them.

Mary stands at the foot of the cross. The journey of her life has led her here.

It is a place of encounter with the ancient one, the destructive force which hides in the pandemonium, the curses, the inhumanity at work on Golgotha, Place of the Skull.

And Mary has met this enemy before.

In Matthew’s account of the infancy of Jesus the malevolence is there in the guise of unbridled power. The jealousy of a king precipitates the senseless slaughter of babies caught in the crossfire between evil and innocence.

But Jesus’ hour had not yet come. Mary and Joseph flee with the child and bring him out of harm’s way to the safety of the desert, to the shelter of an alien soil.

Protected by the cloak of night, stars guide their journey.

They take refuge in a place where they will live in the obscurity and fear felt by all dispossessed.

They become undocumented persons in the land of Israel’s ancient masters, depending on the kindness of ordinary people who do not speak their language or worship their God.

In giving up what she knows of family, home, security, Mary becomes the archetype for all women of all time who must flee their homelands in order to survive.

She is the role model of who they need to become –courageous advocates for themselves and their loved ones, protectors of those too fragile to endure the terrors of war and upheaval.

She is a loving presence to immigrant mothers, displaced mothers, refugee women, enslaved women – to those who will do whatever it takes to save their children from the slow and painful deaths of body, mind, spirit, imagination…

Mary stands at the foot of the cross. Only a few women and the youngest of her son’s disciples stand with her, the remnant of those who had joined him in the first heady days of his mission to save the world. Early on she knew that the day would come when he would leave her to be about his father’s business. She kept the reality of his departure safely tucked away in the recesses of her heart, pondering what it could mean. She knows this: the next time his life is threatened she will not be able to save him.

Mothers and sons have complicated relationships, don’t they? Sons mature, leave home, and embark on lives far from the safety and security that their mother’s love once ensured.

But the love between Jesus and Mary survives distance and renown.

It is a love of utter simplicity, grounded in the ‘yes’ each of them once spoke to their Abba.

It is the ‘yes’ of total surrender, of complete letting go.

They have no need of words to understand each other, but words are necessary for the sake of those who will claim discipleship down through the generations.

“Behold your mother,” Jesus says.
Mary comes to us, then, forever the mother, powerful and holy, given to us by Jesus on the cross.
And he, he is the only son who has come to bring us home.

Something eternal has happened.

Mary, standing at the foot of the cross, be with me, with us, today.

The world is yearning for your mother-love. Help us to be faithful to the deep truth of who we are, of whose we are.

Mary, standing at the foot of the cross, be with us, today.

Sr. Mary is a spiritual and retreat director, writer, and presenter on topics of spirituality and the Charity charism. Currently the Novice/Vocation/Candidate Director, she has served in congregational leadership, formation ministry, education, and as a missionary in the Bahamas and in Arizona.