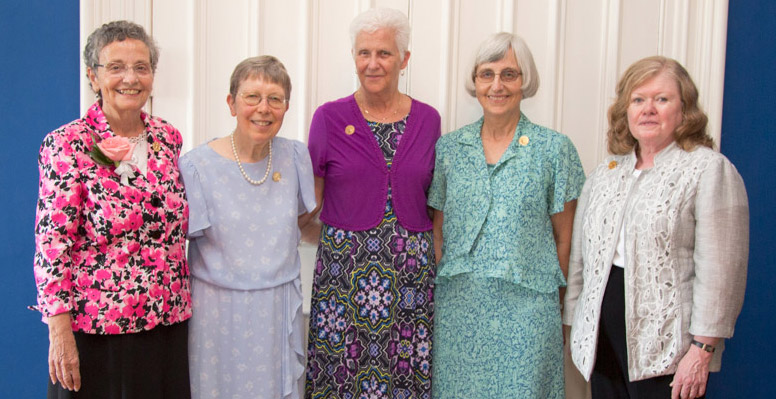 New York City was the place to be in 1964. It was a city of possibilities.

The New York Worlds Fair was opening in Queens: its theme was “Peace through Understanding.” The Verrazano-Narrows Bridge finally connected Staten Island to Brooklyn. Europe (by way of Beatlemania) invaded our shores through our television sets. But, perhaps most important that year were the possibilities and the challenges that the Second Vatican Council, as it drew to a close, was offering to the Church and all its people.

That same joyful message of excitement and of openness to the Holy Spirit was evident once again on September 6 when five Sisters of Charity of New York celebrated their Golden Jubilees at Mount Saint Vincent.

During the Mass at the Chapel of the Immaculate Conception on that day Sister Jane Iannucelli, President of the Congregation, called each of these women: Sisters Kathleen Byrnes, Carol DeAngelo, Carol Finegan, Vivienne Joyce, and Suzanne Ellen Wallin, the “Faces of Charity”—women who have shared the Good News of the Gospel with so many in so many varied ministries.

Sister Vivienne Joyce spoke for the group when she asked all present to reflect on the Second Vatican Council once more and to embrace its Spirit, a spirit that is, she said, “permeating all things, opening up new ways of relating to God, to ourselves, to others, and to the evolving cosmos.”

The YES these Sisters said to the Holy Spirit 50 years ago is still a lived YES today, one that invites all of us to a life “of faith, hope, and love, … we are all God’s people and nothing is more sacred than the lives we live.”

Rev. Joseph Shields, the celebrant, ended the Mass by asking the congregation to affirm the Jubilarians’ YES with a loud AMEN. It was an AMEN that resounded throughout the chapel and across the Hudson River to the Palisades.