Getting to Know You: Sister Winifred Goddard, SC 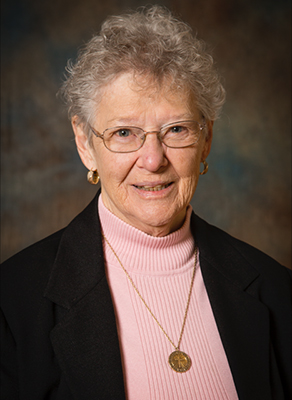 Sister Winifred has been carrying on the mission of the Sisters of Charity for over sixty-six years. She reflected that she has always experienced that mission as “Being Sent” by God. And faith in that all-provident God has sustained her through the years.

Her first sense of being sent was as a math teacher to a new high school in Pennsylvania. “Going there was out of my comfort zone,” she mused, “but it was there that God opened me up to diversity and I rejoiced in that experience.” Another sense of being sent was when she worked in a small mission town in Texas where her cultural bias was shattered, and another facet of God’s wonderful diversity was revealed to her.

Her next being sent was to the Convent of Mary the Queen where she marveled at the depth of the care and concern the Sisters had for each other. She ministered to the Sisters and noted that they, likewise, ministered to her.

Now in active retirement at the Assisted Living residence in the New Jewish Home, Sister Winifred reflects on all the “Being Sents” as gifts that an all-provident God used to change her and enable her to be content, knowing that God never has and never will abandon her.