Getting to Know You: Sister Patricia Padden, SC 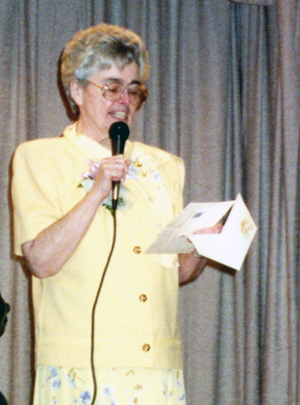 From her earliest days as a Sister of Charity, Sr. Patricia always put charity first. If someone needed help, she reached out—even if it got her into difficulties. Her wonderful Irish sense of humor in many such predicaments has been her saving grace. One example happened at a rally for parents and children of St. Joseph’s School in Yonkers. One of the mothers fainted, and even though she knew she would be late for community supper, she didn’t rest until she got her to the emergency room.

As an educator in Yonkers in the early-1970s, Sr. Patricia tried to be a source of strength for her eighth grade students who faced tremendous peer pressure. She organized “decency rallies” for the students and their families, to which even Mayor Flynn attended.

Sr. Patricia says firmly, “My ministry may have changed, but I still have a ministry.” Having been touched by the difficulties of the parents of her students, she is happy to reach out to any of the employees at Kittay where she now lives. One example of this was her ability to help a mother who has a son with autism. The mother was concerned about a high school choice for her son. From her past experience, Sr. Patricia was able to provide guidance, which was much appreciated by his mother and his teacher.

In the past, her interests never ventured into politics but she is now a prolific letter writer. She writes to her Congressman when she witnesses a need or injustice. Sr. Patricia has also assisted the Immigration Task Force by inviting the Sisters at Kittay to participate in letter-writing for such causes.

Now, as always, she speaks out for those who cannot speak for themselves, especially when she sees a need among her Sisters. Her sense of humor belies her own physical disabilities and she is helpful to those with whom she lives. Her interest and prayers still enfold situations in the world and Church that need her support.