Getting to know you: Sister Patricia Mulryan, SC 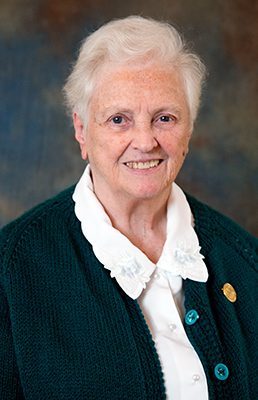 Sister Patricia Maureen Mulryan, SC, affectionately called Sr. Pat, speaks of the many surprises in her community life surrounding ministry assignments, which she never really sought but usually just appeared at her doorstep. These “surprises,” as she calls them, often took her on paths she never really desired or expected for herself, but came to her in the form of a need at a particular time, to which she always responded.

Sister Pat’s beginnings as a teacher led her to school administration. God’s surprises started to unfold as her life’s journey brought her into the financial field as Treasurer for the Sisters of Charity and for the Daughters of Divine Charity. As she reflects back on her experiences, she sees the ways of God powerfully at work within her life. She is grateful that each new ministry was not only a challenge, but one she came to love and use her gifts for the community. Even today, Sr. Pat is active on the Global Poverty Task Group and an important member of the Charitable Trust and Sisters of Charity Housing Board on Staten Island.

Now living at Seton Village in Nanuet, NY, “there is no grass growing under her feet.” Her gentle, quiet manner is visible and felt in a myriad of ways. She witnesses and “admires the laity’” as she listens to their stories and participates in many activities with them. Even a small kindness such as delivering the daily newspaper to the doorsteps of residents is a part of her life now. In addition, she performs acts of charity, which includes working at the food pantries at St. Ann’s and St. Aedan’s, small shopping for neighbors, participating in a senior group in New City, occasionally driving others, and so much more.

Sister Pat is “moved by the depth of the laity’s spirit” when she attends the weekly bible study group at St. Aedan’s. Her faith and her daily living of charity are mutually exchanged with the many folks she encounters, especially the residents who now are her active ministry of caring. There is no doubt why Sr. Pat calls her life blessed. She continues to respond daily to the God of surprises.