Getting to Know You: Sister Grace Henke, SC 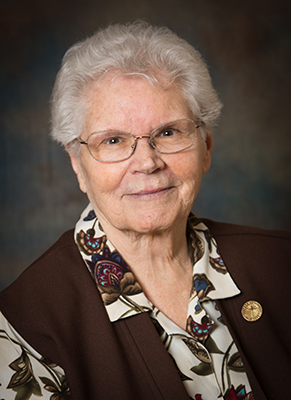 Sister Grace Henke has been a Sister of Charity for over sixty-five years. She attended Catholic schools in the Bronx and Manhattan, which is where she first met the Sisters of Charity. Their example of kindness, prayerfulness, and service led her to enter the Community in 1951. She began her ministry as a student nurse at St. Vincent’s Hospital in Manhattan. After earning her BSN and MSN, she worked in the wards of the hospital serving the poor. Sister Grace cherishes these years as exciting, challenging and fulfilling the mission of the Sisters of Charity—to serve all in need, especially the poor.

In 1963 the focus of her nursing changed and she was asked to teach in the St. Vincent’s School of Nursing. Topics included Microbiology, Anatomy and Physiology, Medical Physics and Pharmacology. During this period Sr. Grace also received an EdD degree from Columbia University and authored Med-Math; Dosage Calculation, Preparation, and Administration, which went into five editions.

In 1982 she was appointed an adjunct professor at the College of Mount Saint Vincent where she taught Pharmacophysiology and Medical Ethics while still serving on the Ethics Committee at Saint Vincent’s Hospital. When the school of nursing closed in 1999, Sr. Grace responded to a different need and was certified as an ombudsman by the New York State Office of the Aging, skills she used as a pastoral minister at a local senior citizen’s residence. In addition, she taught ESL classes (English as  second language) at the Sisters of Charity Center and at Casa Esperanza in Yonkers.

Now residing at the New Jewish Home ALP, a retirement home for the Sisters of Charity, Sr. Grace continues her ministry of service and care for the Sisters, mindful of and grateful to God and the community for the graces which have sustained her through the years.