Getting to Know You: Sister Gloria De Arteaga, SC 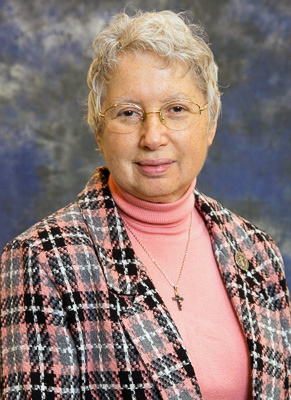 Before or after entering the Sisters of Charity, Sister Gloria never dreamed of being a missionary, or even of living outside the New York area. Up until that point, her ministry included teaching high school math in New York and she lived in the House of Prayer in Scarsdale for thirty-one years. Therefore, when asked by her Regional in January of 2006 if she would consider going to Guatemala on mission, she thought she was joking.

The Sisters of Charity had received a letter from six girls from Guatemala asking to become Sisters of Charity. Sister Gloria was asked to pray about it, and later asked if she would be willing to go to Guatemala for a short time to see if she would consider it. On her last full day during Mass in the Cathedral in Solala—still unresolved—she recalls the gospel reading and the words, “…they left everything and followed Him.” This was followed by “Pescador de Hombres” (fisher of men) and the words rang in her ears, “…at your side, I will find other shores.” At Communion she asked Jesus, “Do you want me here?” and heard a distinct, “yes.”

Thus, began an eleven-year journey accompanying these aspirants on the land of the future Barbara Ford Peace Center. Days at the Novitiate were filled with forming a community, along with Sr. Nora Cunningham, who accompanies the Postulants and the Associates. Learning to drive manual shift was a challenge, which was required to drive in Solala. Doing so enabled her to drive to Guatemala City to shop or drive the Novices to programs or workshops on religious life. A community life was built around communal and private prayer, one hour of which had always been part of Sr. Gloria’s prayer life.

How much her past opportunities came into play, such as her courses in Scripture, Spiritual Direction and the years of ministry and community living in the House of Prayer. Most of all, it was her fluency in Spanish from her own background. Presently, her scripture study classes with the Novices are open to all, as well as her English language classes. Sister Gloria helps out many, as well, in translating English documents, even those of the Bishop.

Sister Gloria’s dream for the Mission of Charity to be lived into the future is that when the Sisters from New York can no longer be there, they will leave behind a vibrant group of indigenous Sisters who will carry on the vision of Mother Seton and Saint Vincent de Paul. These seeds are already growing as the Novices train for service in teaching, nursing, and community service and will return from their mission experiences filled with joy in serving their people.