Getting to Know You: Sister Barbara Srozenski, SC 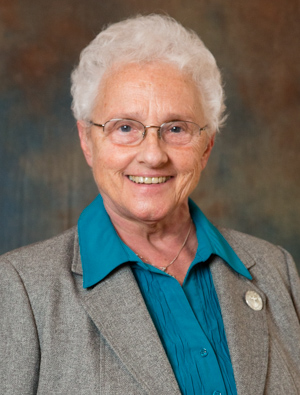 Reflecting on her sixty-six years as a Sister of Charity of New York, Sr. Barbara realized that teaching was the God-given gift she would use in ministry. She began teaching chemistry at Cardinal Spellman High School in the Bronx, then taught at the Academy of Mount Saint Vincent in Tuxedo Park, and Sacred Heart in Yonkers.

After teaching at Seton College in Yonkers, Providence led her to get an MA in Theology and Pastoral Counseling. It wasn’t long before Religious Studies overshadowed Chemistry. When Seton College merged with Iona College in New Rochelle, Sr. Barbara accepted a teaching position and remained at Iona for twenty-two years. The most memorable classes were those on “Death and Dying,” which was taught to nursing students.

Breaking out into adult education opened up a new experience of sharing faith life at the New York Archdiocesan Spiritual Development Center. It was here that the ministry of spiritual direction became a way of sharing and thanking God.

Presently in active retirement, Sr. Barbara is a member of the Creation Task Force, where she convenes a prayer and reflection group, “Life Transforming Spirituality,” that highlights the integration of science and spirituality. Her outreach also includes teaching English as a second language at Casa de Esperanza, the Sisters of Charity mission for immigrants. Here she is enriched by the deep faith of the mothers who come with their children.

Sister Barbara’s retirement gives her time to reflect on the goodness of her life with gratitude, and the Community of the Sisters of Charity who have supported her throughout the years.