Getting to Know You: Sister Genevieve Wetmore, SC 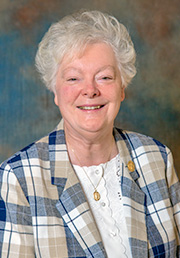 Sister Genevieve’s first assigned ministry as a Sister of Charity was to be a first-grade teacher at St. Margaret of Crotona School in the Bronx. Being an early-childhood teacher was to be her joy and privilege for the next fifty-five years. She experienced God’s embracing love for each student, and in preparing them for First Holy Communion or other religious instructions, she says, “the children would glow, and so did I.” Learning about our community virtues of humility, simplicity and charity was enhanced by observing the children’s open minds and hearts to grasp what she was teaching, their trust in God and their little acts of charity.

Working with faculty and parents led to mutual growth, discovery and understanding. This was also experienced in the Fordham Internship Fellowship Program that cemented life-time friendships. Sister Genevieve’s on-growing correspondence with so many over the years has earned her the name,”Post Office Mistress General.” Now in her sixtieth anniversary of religious life, she looks forward also to a sixtieth reunion with her Curtis High School class of 1957.

Presently, Sr. Genevieve is the volunteer Assistant Director of our ESL Program on campus, Project LIGHT. There are sixty-eight students, many of whom are working toward receiving their citizenship. In league with this ministry, she joined the Immigration Taskforce.

Sister Genevieve also participates in campus events and charitable activities sponsored by the College of Mount Saint Vincent Campus Ministry such as donating books, clothing and food. She is also one of the sacristans at the convent, and often brightens days with little gifts and visits. She also plans to be a volunteer one day a week in a nearby school.

Sister Genevieve believes her ministry of charity is already being lived into the future as she accepts the opportunities each day offers with God as the source of all her endeavors.