From the 1953 Brooklyn Dodgers to a Sister of Charity 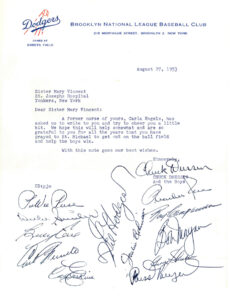 The following is from the Spring 2021 issue of Vision.

It’s a statement often repeated in the world of archivists, “You never know what you are going to find.” Last January 2020, while researching a question in documents from St. Mary’s Hospital, Brooklyn, two mis­placed letters were discovered on Brooklyn National League Baseball Club “Dodgers” letterhead. The letters were both written on Sr. Vincent Maria O’Brien’s behalf, a beloved staff member at St. Joseph’s Hospital in Yonkers, who was quite ill at that time. Incorrectly addressed to “Sr. Mary Vincent,” a letter dated August 27, 1953, was signed by Chuck Dressen,1 Manager of the Brooklyn Dodgers, “And the Boys,” referring to the baseball players on the team that year. An interesting story emerged as this curiosity was further investigated.

Although the name of the addressee, Sr. Mary Vincent, was incorrect, the sentiment was sincere. When Sr. Vincent Maria’s health declined, Carla Engels, her nurse at St. Joseph’s Hospital, wrote to the Dodgers, informing them that Sr. Vincent, a loyal fan, was ill. In the response letter, Mr. Dressen wrote, “We hope this will help somewhat and are so grateful to you for all the years that you have prayed to St. Michael to get out on the ball field and help the boys win.” The letter also included signatures of 12 players: Pee Wee Reese, Duke Snider, Billy Cox, Carl Furillo, Carl Erskine, Gil Hodges, Jackie Robinson, Preacher Roe, Roy Campanella, Bob Morgan, George Shuba and Russ Meyer.

Unaware of Ms. Engel’s outreach to the team, Dr. Michael J. Lynch, a St. Joseph staff doctor, also wrote to the Dodgers club on behalf of Sr. Vincent Maria and mentioned her poor health. The response letter from Fresco Thompson2 states, “Please tell Sister Vincent that the players on the Dodgers feel very confident that this is their year to destroy Yankee supremacy.”

In view of the historical interest and potential market value, the letters were brought to James Spence Authentication for appraisal. The company reported that while the letterhead is genuine, the signatures, unfortunately, are inauthentic. The appraiser explained that it was common practice at that time for office staff to pen requested autographs. Some, it was revealed, “had become very good at it.” These signatures were often written by the same office staff, most likely the women, who also typed the dictated correspondence. In the center of the letter the initials “CD:pjm” indicates the letter was authored by Chuck Dressen and typed by an employee, “pjm,” who may have also contributed some of the signatures on the page.

The inauthenticity of these signatures, however, does not diminish the historical value or the sentiment conveyed. The letter’s informational value is significant as a part of Community history and reveals an aspect of personal interest and regard. In addition to Sr. Vincent’s career as a devoted Sister of Charity who served in three metropolitan area hos­pitals, she was apparently held in high esteem by her cowork­ers, who were inspired to contact the Dodgers club, hoping to rejuvenate her spirits.

Sr. Vincent Maria O’Brien was born Delia Agnes O’Brien on October 24, 1879, on Long Island. She entered the Sisters of Charity on April 15, 1901 and pro­nounced Final Vows on July 24, 1929. Sr. Vincent Maria had two siblings who were also Congregation members: Sr. Mary Gregory (1874–1965) and Sr. Mary Ellen (1867–1923). Sr. Vincent Maria was a health care worker at St. Vincent’s Hospital in Manhattan from 1902 to 1905 and at St. Vincent’s Hospital in Staten Island from 1905 to 1940. She was assigned to St. Joseph’s Hospital in 1940, where she passed away on September 25, 1953, one month after Nurse Engels wrote the first letter and one day after Dr. Lynch wrote the second. Hopefully, she was aware of the receipt of the letter with players’ signatures.

The Dodgers played in the World Series in 1941, 1947, 1949, 1952, 1953, 1955 and 1956 at Ebbets Field, and finally won in 1955. Sr. Elizabeth Vermaelen, president of the Congregation from 1995 to 2003, remembers sitting in the stands as a young child next to her father feeling the excitement of watching the Dodgers play at Ebbets Field. Home to Brooklyn’s Dodgers from 1913 to 1957, the field was demol­ished in 1960 and replaced by apartment buildings. Shea Stadium, home of the new National League New York team, the Mets, was built in 1964 and replaced in 2009 by Citi Field, which incorporated the architectural style of Ebbets Field. Certainly, Sr. Vincent Maria, like other Sisters of Charity Dodgers’ fans, would have followed the team from Brooklyn to Queens.